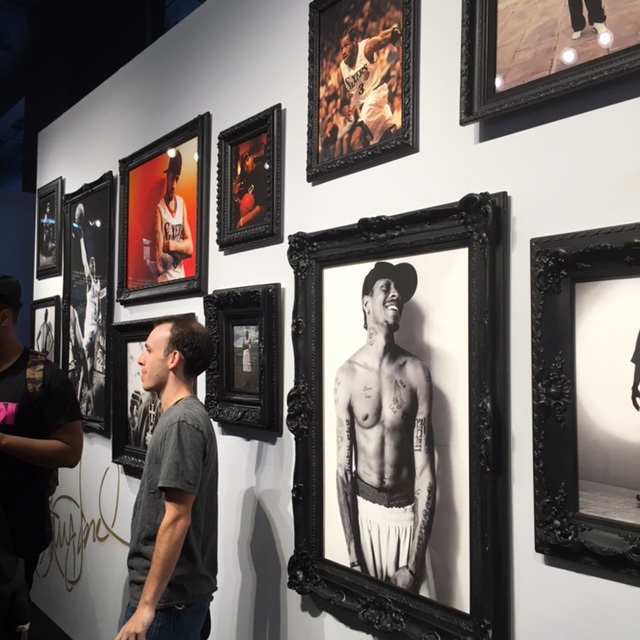 The Source caught up with the legendary A.I and Mike Packer of Packer Shoes as he discussed Iverson’s legacy and his special relationship with Iverson.

Allen Iverson will most certainly go down as one of the best NBA players to touch the rock and deemed as one who changed the game of basketball and sports in general with his bad boy attitude and stand-up guy mentality. Reebok and Packer shoes paid homage to the Answer with a special private event in union square to celebrate 20 years of the Reebok question mid and his induction into the Hall-of-Fame.

Reebok and Packer shoes revealed the curtain call collaboration at the event on (Sept 15) as the special edition shoes were released today. Gary Land a legendary photographer of A.I revealed his memorable photos of the Answer in a book. The event featured iconic photography along the walls of A.I with photos captured by Gary Land as drinks and refreshments were served. A.I was joined by his family, friends and a few celebrity friends like Fabolous, Swizz Beatz as well as Michael Packer, Packer Shoes founder and Todd Krinsky, the Reebok VP who introduced Iverson to the crowd as he gave a speech about his hall-of-fame ring, his love for Reebok, Family and much more.

Check out what A.I and Mike had to say below.

What were the first pair of Reeboks you owned?

Who are your top 3 rappers of all-time?

Micheal Packer of Packer Shoes explains his relationship with A.I and his thoughts on his  footwear legacy after basketball.

How does it feel to have had this relationship with Allen for so long?

Mike P: It’s something that become a battle over the years where it’s like at the end of the day and Iconic shoe is a iconic shoe and over time we’ve done a few and we get to know Allen a little bit and to get to do this shoe with him and he get’s in the Hall-of Fame we just wanted to do it all about him when we met him at Token 38 he was honestly the nicest guy when he see’s fans that come out you can tell when an athlete means it or just doing it to do it, he’s just a good guy and that’s why we wanted to make it all about him.

With this being the 20th anniversary how does it feel to have come so far with the collaboration with Allen?

Mike P: I mean it’s something that thankfully we’ve been apart for awhile but if you look at his shoe in the industry it’s a shoe that even if it came out today would be retro-able years from now . So it’s the one thing in his legacy with Reebok which I think will carry on and carry on and were lucky enough to have a part of it and you have to always do it in a way that the heart will receive.

With A.I being in the Hall-Of-Fame now what do you think about his legacy and what he’s left behind with basketball and sneakers?

Mike P: I think now his legacy I’m hoping it goes beyond what he did on the court but will carry on forever but him as as a person and I just know that we’ve gotten to know him as a person a bit and getting to know him as a person is getting to know the inside of somebody and he really cares and tonight is all about the press and the media but tomorrow when you have all these guys showing up and I even saw it how a kid has been waiting in line for 12 hours already he let’s him through and he shows him love that get’s to show the inter of a person and that’s what I think will carry on the legacy for a long time.

Do guys see another collab coming out soon?

Mike P: Nah, we always said that this will be something and the Hall-Of-Fame would be it but I think there’s other things that we can do he’s not just a shoe there’s a person you can bring to other markets and rather that’s internationally we are thankful over the years that we have those kind of relationships so you never know.

Any last words for the Source?

Allen Iverson Names The First Pair Of Reeboks he Owned and His Top 3 Rappers of All-Time : The Source