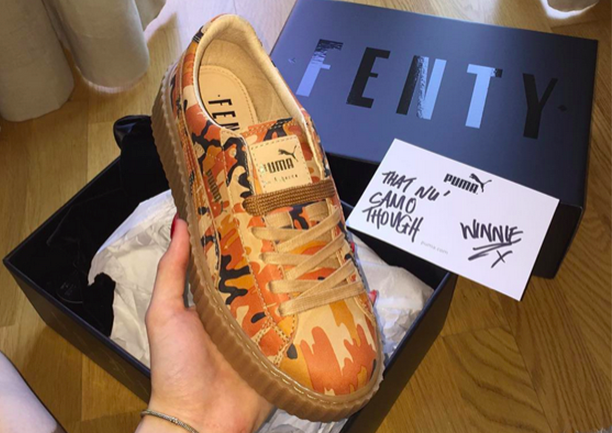 Rihanna is constantly dropping something new for us to cop. A new Puma Fenty by Rihanna Creeper is reportedly hitting stores July 28. The fatigue colorway will be the fourth installment of her shoe release.

Although Puma has not officially released details about the newest creeper, they posted: “Arriving on July 28th— the countdown to a new creeper color starts now” on their website earlier this month. In addition, model Winnie Harlow┬átook to Instagram posting the picture below with caption, “That Nu’ Camo though!! @Puma blessing me with the nu- nu- before anyone else…”

The creepers have been super popular causing Puma’s website to crash numerous times. The $120 sneaker has sold out repeatedly in other colorways so if you’re expecting to get them, make sure you’re online before they hit the site. The “White-Glo,” “Black Satin,” and “Green-Bordeaux” versions sold out in less than 45 minutes. Along with Puma.com, make sure you’re on Nordstrom┬áand Bloomingdales┬áwebsites—they will also be available there. Along with the creepers, more of Rihanna’s faux-fur slides will be restocked as well. Check out the other camp-colors below.