Drake Volleyball’s So Hard, 6 God’s All About Female Athletes 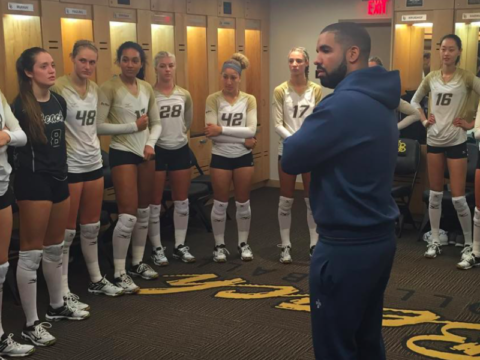 OVO Sound‘s Drake is more motivational than you think. The rap star came through to deliver an inspirational speech for the Long Beach State women’s volleyball team this week.

According to reports, Drizzy showed up for the crew’s match in support of his goddaughter.

The 29-year-old rapper make a little appearance at the team’s game against Loyola Marymount University on Thursday night, but he wasn’t there by coincidence. The “Hotling Bling” rapper was there to surprise his goddaughter, Ashley Murray, who plays for the team. (Yahoo! Celebrity)

Drake’s goddaughter Ashley Murray shared a special moment from his appearance on her Instagram page.

One of Murray’s teammates also posted up a shot of Drizzy with the crew on social media.

The post Drake Volleyball’s So Hard, 6 God’s All About Female Athletes appeared first on SOHH.com.

Drake Volleyball’s So Hard, 6 God’s All About Female Athletes : SOHH