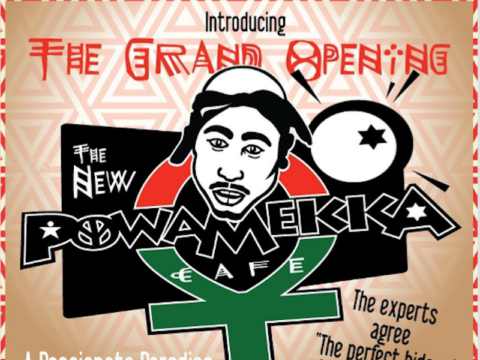 Long live Tupac Shakur. In honor of 2Pac’s 20th anniversary of his passing, a restaurant has announced a pop-up eatery themed after the iconic hip-hop artist.

According to reports, the Pac-inspired spot will open September 13th in Fresno, California.

Now the Powamekka Cafe will open thanks to the efforts of Fresno burger shop, Take 3, and Sam Hansen, a foodie and marketing director for the minor league baseball team, the Fresno Grizzlies. Along with menu items culled from Tupac’s original sketches, the Powamekka Cafe will also serve some of their own original Tupac-themed dishes. (Rolling Stone)

Earlier this week Danai Gurira signed on to play Afeni Shakur in the film, and now she’ll be joined by Lauren Cohan, who’s best known for her role as Maggie on AMC’s hit zombie show. Cohan will portray Leila Steinberg, an early mentor of Tupac. Benny Boom is directing All Eyez, which stars Demetrius Shipp Jr. as the influential hip-hop artist. Production is underway on the movie, which does not yet have a release date. (Entertainment Weekly)