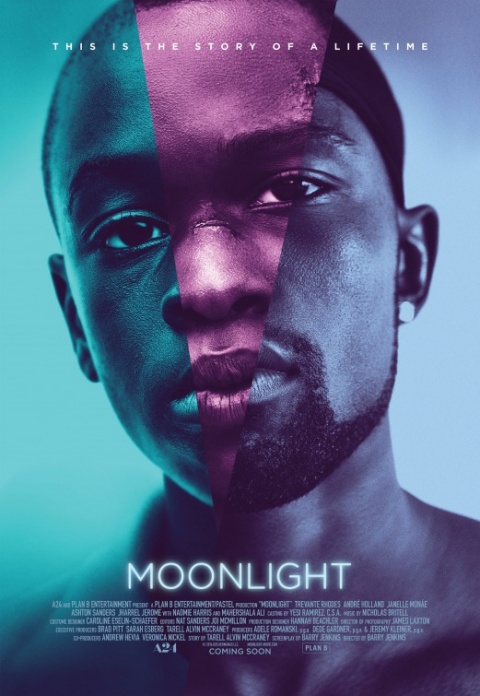 When a movie moves your soul, clenches your heart from it’s deepened trenches, you know a film is a gem. Enter Moonlight. From the mind of Barry Jenkins, based on Tarell McCraney’s “In Moonlight Black Boys Look Blue” play, Moonlight shines as a thrilling and emotional ride into the life of Chiron, an inner city minority in Miami struggling with sexuality and life’s unforgiving tribulations.

Well balanced and vulnerable, Moonlight captures empathy and an unyielding compassion for it’s characters, despite it’s dysfunction. Sweetly tender, viewers may tear up, shake their head in shame or even burst in anger at it’s characters, thanks in part to the actor’s vivid performances and Jenkin’s strong pen game.

The story of poverty, drug addiction, liberation, Moonlight is a rich story of coming into one’s own, despite everything on assignment against it.

The Source caught up with two of it’s stars, British actress Naomie Harris and Andre Holland during their Chicago press stop as they talked about the importance of this film, the election and more. – Angela Wilson

How did you get involved with Moonlight?

Andre Holland: Me and Terrell go back a long way; I’ve done a bunch of his plays out here in Chicago, New York and Atlanta, all over the place. And Barry [Jenkins] is someone who I’ve admired since his first movie, Medicine for Melancholy.

I did Selma a few years ago, with Plan B, who also produced Moonlight and producer Jeremy Kleiner told me about the movie and it happened pretty quickly. I auditioned on tape and sent it in and they called me a few days later.

Were there any apprehensions about accepting your role as Kevin?

Because of the homosexuality?

Nah, I was like this is a great part and this story needs to be told, the writing is great, the directors are great.

What have you learned new about yourself after your role in Moonlight?

I think every part teaches you something, and sometimes you don’t know what it is until later on. But I think this part- compassion, and truly having it for the people. Empathy and patience for other people and this character does a good job of, particularly in the third chapter.

What would you consider your biggest flaw?

Probably that I don’t do a good job of keeping in touch with people. I’m not very good with technology or just staying on top of relationships and I kind of take for granted that people will always be there. I’m trying to do a better job of doing that.

I hate texting, I don’t like social media. I’m old school, I prefer to pick up the phone and talk to somebody or make plans to see each other. Now, all of my friends are all over the world doing different things; everybody’s on WhatsApp and sending emails, so I’m trying to carve out time everyday to just focus on catching up with people.

But I’m also a very curious person so I’m easily distracted by things. I’ll walk out the house and see something interesting and I’ll spend the whole day just focused on that whole thing.

I was talking to someone not long ago about dating and instead of asking someone on a date they ask for your handle or that they’re going to follow you! *laughs* And that means, I guess you’re interested and they slide in the DMs. Yeah, I don’t know about all that.

Andre, if you weren’t an actor, what would you be?

There’s a lot of different things I’m interested in but I’d probably be a travel writer or an explorer or sailor. Just exploring. I love to travel!

Man, that’s a tough one! I’ll say Stockholm, Sweden. I’ll also say Portugal, and I live in New York, and that’s my home so I got to say New York.

If Donald Trump wins this election, are you moving out the country or nah?

Mannn look, I don’t know what I’m going to do if he wins. I’m going to just pray that the country comes to it’s senses, I think we are, we’re waking up, just hoping everything goes well.

What else you got coming up?

Doing a play on Broadway this January called “Jitney,” an August Wilson play, hopefully people will come and see that. But keep watching and keep rooting for the fella if you can!

Naomie, how did you go about getting in tune with your character Paula, who was a crack addict?

Naomie Harris: For me, YouTube was the incredible mind of information. And what was great about YouTube is there’s these snippets of recordings of people who went out on their iPhones and recorded interviews with crack addicts in Miami- something I wasn’t able to do myself because I wasn’t able to be in Miami to do my research, I was [researching] in different countries.

So I was able to have access to that incredible resource and to see those interviews and documentaries of Miami in the 1980s. And all of that gave me insight into a world I really didn’t know much about at all.

Did you have any apprehensions when it came to playing a drug addict?

I did- I was very hesitant on taking on Paula. I’ve always said I wanted to portray positive images of black women and I was scared Paula would become a cliché. But in speaking to Barry who told me Paula was based on his mother and Tarrell’s mother I realized he had an vested interest knowing she was a three dimensional character with full humanity.

What have you learned new about yourself after Moonlight?

I think I stretched myself in ways I never knew I could. I was scared about taking on this role – I didn’t drink any alcohol, I didn’t smoke, I’m like how would I understand what it’s like to be an addict? And I realize it’s possible with work and commitment and determination to reach any human being. So when people say they don’t have compassion or understanding, it’s very possible if you just open your mind of understanding and put yourself in their shoes.

And you don’t always have to understand what has caused anybody to make their decisions that they’ve made to put them in the situation that they are. It’s really important not to be judgmental.

What would you consider your biggest flaw?

I’m highly, highly self critical. I don’t think that’s a good thing at all. I think a lot of people fall into the trap that self criticism motivates you and I don’t think it does and I would really like to get out of that trap and be a lot more supportive of myself.

Where do you think that stems from?

My mother is very critical. *laughs* It’s not healthy to be so hard on yourself and I’m working on being softer and to just know that mistakes are apart of life and mistakes are healthy and they can teach you really great things. It’s about learning from your mistakes as much as your successes because we’re often told failures teach us the most.

If you weren’t an actress, what would your occupation be?

I’d probably be a writer. I used to write as a child, I entered writing competitions and I wrote a novel when I was 13. That was my thing and my mother was a writer as well so I guess I picked it up from her.

I love the world of fantasy and I love creating characters.

What would you tell 18-year-old Naomie?

Try to worry less and enjoy the journey more. And it’s interesting you bring that up because the cast and I were playing a game asking if you could go back in time and change anything, what would it be? And I’ve been analyzing it was for the last 24 hours and I couldn’t think of anything at the time and I still can’t think of anything because everything that happens happened for the right reasons and I’ve learned so much from it!

What else can we expect from you this year?

I’ve got Collateral Beauty that comes out on December 18 that I’m very excited about with Will Smith, Helen Mirren and Kate Winslet– it’s another really emotional film with an uplifting message- a reminder of seeing the beauty of life.

How do you detach yourself from your characters?

It’s pretty easy; it was easy with Paula, I really felt I exercised her out of me and I had three days to intensely inhabit her and I knew after those three days I had to go back into something different so it felt easy to let her go.

But I played Winnie Mandela and that was very, very hard to get out of her. I think it took me months to leave her behind; she really got under my skin and not in a good way. It was also being in South Africa and the legacy of Apartheid is so apparent still- you really feel it. And that whole mindset- the way of seeing the world in a segregated way is really destructive to the psyche and it was really hard for me to leave behind.