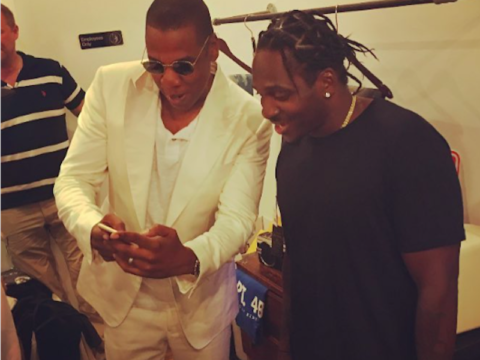 Heading into the weekend, Young Hov tossed up his vintage “Brick Phone” playlist.

Hov delivers a 35-track playlist titled “Brick Phone” dedicated to hip-hop’s golden era, where the majority of hustlers and drug dealers carried those oversized cell phones. We go way back to ’88 with Boogie Down Productions’ “My Philosophy” featuring rhymes and production by KRS-One. After EPMD’s “So Wat Cha Sayin’” and Big Daddy Kane’s “Ain’t No Half-Steppin’,” hip-hop heads will salute Hov’s genius for putting Gang Starr and Nice and Smooth’s “DWYCK” on here. (Complex)

Earlier this week, Jay made headlines after partnering up with Hollywood powerhouse The Weinstein Co.

Jay issued a statement and revealed what fans could expect from the partnership.