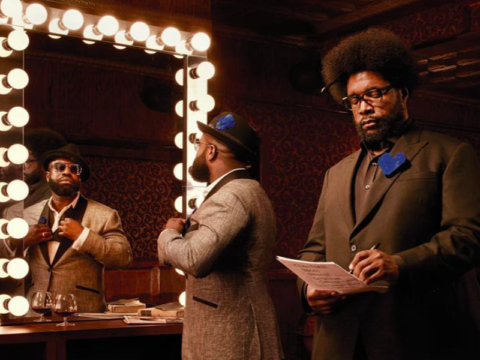 So, it’s only fair that the Tonight Show house band would also poke fun at current election headlines when Hillary Clinton appeared on the show as a guest. As a nod to Clinton’s recent pneumonia-tied health scare debacle, The Roots performed part of Ghostface Killah’s “Mighty Healthy,” off 2000’s Supreme Clientele. Fallon continued the joke by sporting a surgical mask and hand sanitizer during his interview with Clinton. (Paste Magazine)

The Roots, the “Fallon” house band, play a song to introduce the entrance of every guest on the show. The song they choose for Donald Trump’s entrance was Erykah Badu’s “20 Feet Tall” (from New Amerykah Part Two: Return of the Ankh). As Trump entered, the Roots sang the lines “Then you, you built a wall/ A 20-foot wall / So I couldn’t see,” as Think Progress points out. This seemed to mock Trump’s campaign promise to force Mexico to build and pay for an enormous wall along the U.S.’s southern border. (Pitchfork)

A week ago, State Property’s Freeway revealed his support for Clinton.