Woptober’s Very Own Gucci Mane Breathes In Freedom: “It’s Over With” [Video] 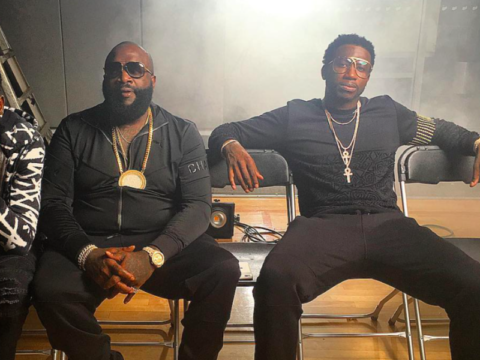 Atlanta rapper Gucci Mane is a free man. The hip-hop veteran is reportedly off of his house arrest months after being released from jail.

Snapchat footage has surfaced of Guwop cutting off his ankle monitor.

Earlier this month, Gucci announced big features he had coming up with artists like Lil Wayne and E-40.

A few days prior, Gucci announced plans to put out a new album called Woptober.

“Gucci like, ‘Hey man, we oughta do a tape together,’ and Drake was like, ‘Bet, we oughta do it,’ and right then, he started thinking about a name, and Drake said, ‘We oughta call it the..’ I think he said The 6’ers,” Zay revealed. “Cause where he from they call it The 6 and Gucci Mane from Zone 6. Then we just ran with it right there, and then Mike WiLL just jumped in like, ‘Aye, yeah me and Zay start on that, we’ll do the beats for it, we’ll start on it right now.’ And everybody was in agreement with it, so it’s like, okay that’s what we gonna do. And we already started doing songs for it.” (VLAD TV)

The post Woptober’s Very Own Gucci Mane Breathes In Freedom: “It’s Over With” [Video] appeared first on SOHH.com.

Woptober’s Very Own Gucci Mane Breathes In Freedom: “It’s Over With” [Video] : SOHH