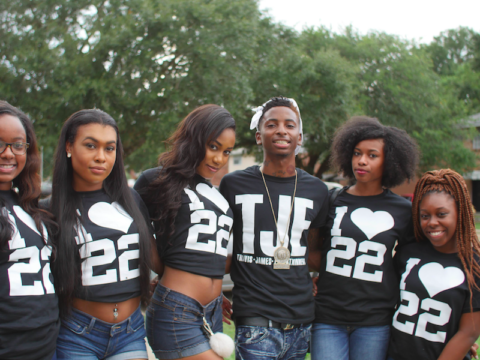 [Rap newcomer 22 Savage and his Travis James Entertainment takeover have arrived. The viral hip-hop artist tells SOHH about his Louisiana roots and what it will take for him to consider collaborating with 21 Savage.]

People respect me. They know my background. If there’s only one thing they know, it’s that this dude isn’t to be played with.

It’s not just funny with me. I’ve got a serious side.

My influences are the neighborhoods. Baton Rouge. Boosie. I grew up off of Boosie. I used to be around him for a minute so shout-out to him.

Right now I don’t really know who I want to work with. I’m working with [my sidekick] Scratch Off right now, he’s really trying to scratch some things off. We’re really trying.

First we’re going to get some hot sh*t on our own and then look at other options.

He’s Travis James Entertainment too. He’s signed with us.

I’m big brother and he knows one thing: I’m really raw with it. He’s talented but he knows what I’m capable of.

I don’t know about a 21 Savage collaboration right now. That’s up in the air. We’re gonna need a check.

The haters can eat my d*ck. F*ck haters. They’re going to say whatever they want. I was hot before I started rapping.

22 Savage has become an overnight internet sensation due to the help of PR firm Jonathan Hay Publicity for assisting with creative marketing and strategy.

22 Savage is on a mission to be the next great artist out of the Gulf Coast, representing for the new generation of music lovers. As a comedian and fun-loving performer, 22 Savage has taken the hard edges of his environment and incorporated a sense of purpose and business to everything he does. 22 Savage has been through it all and still manages to smile even with a murder trial looming in the future, he still manages to keep his head up and focus on music and keeping his fans happy. He is facing the possibility of life in prison or even the death penalty. He lost 2 of his best friends to gun violence including one getting killed right in front of him. He has been through several trials and tribulations. And he spells it out through his music. Whether 21 Savage or any other haters like it, the world is truly about to find out who 22 Savage is if they haven’t found out yet. His greatness will truly be found out soon enough by the whole world.