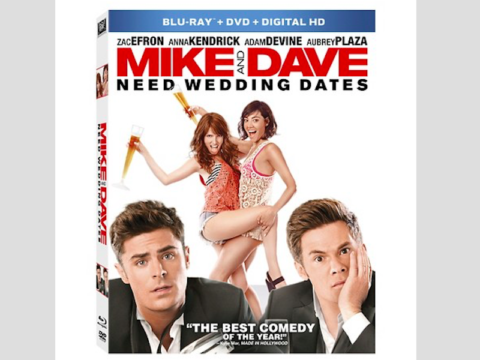 [With the summer blockbusters now behind us, the long-awaited Blu-ray release of must-see comedy Mike & Dave Need Wedding Dates has arrived. Check out the top five things we loved about the decked-out Blu-ray!]

One thing you’re going to go nuts over with the Mike & Dave Need Wedding Dates Blu-ray is how much Deleted Content is on here. You have 14 deleted scenes and these aren’t just little 20-second things. You have over 20 minutes worth of hilarious content that’ll make you spend just as much movie on the bonus features as the feature flick.

2. The Choice Is Yours

Let’s face it, we’re living in a new day and age. Blu-ray is always going to be your go-to option but with college, study halls and daily commutes to work, who ever has time to sit in front of their TVs and pop in the Blu-ray? Save the Blu-ray night for the weekend and get your Mike & Dave Need Wedding Dates on the go. If you purchase the Blu-ray, you’ll get the Digital HD option which will blow your mind away. Not only can you see this on your Apple TV device, but you’re able to watch this on your tablet, smartphone and computer. No matter the device you’re on, this Blu-ray has you covered for the times you can’t sit down on the couch.

You’re going to stay stuck on the bonus features. Simply said. The movie blows you away by itself but when you really explore all of the packed bonus features, you’ll get a full-fledged perspective on Mike & Dave Need Wedding Dates. There’s probably nothing funnier on here than the gag reel. You’ll see the entire cast, Zac Efron, Adam Devine, Anna Kendrick, Aubrey Plaza and other actors burst out into laughs. Watch key moments and the star-studded cast not be able to hold it in and bring you to tears.

If you like to nerd out while the movie’s playing, you’re going to totally dig Mike & Dave Need Wedding Dates director Jake Szymanski’s commentary. While the bonus features are funny and enjoyable, there’s nothing more entertaining and thought-provoking than getting into the mind of Jake Syzmanski. From start to finish, he tells you about the cast’s chemistry, shooting locations, props and plenty more. Grab the popcorn and get ready to nerd out in the most awesome way.

There’s nothing tougher than a funny scene coming to an end. Fortunately, the Mike & Dave Need Wedding Dates Blu-ray gives you nearly 20 extended scenes. Relive your favorite moments with actual scenes from the flick just extended to hurt your stomach a little more with the funnies.