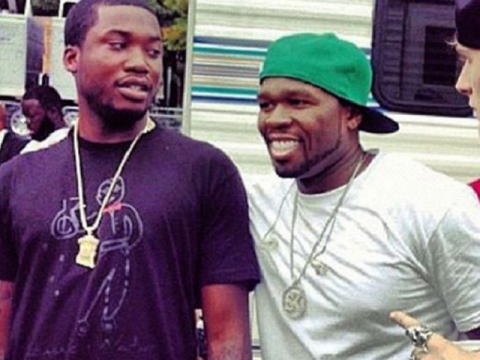 In Fif’s opinion, the fact Drake’s “Back to Back” diss song landed a Grammy nomination singled-handedly proves Meek took the loss.

“When you see them give Drake an award for the record, it means they viewed it as if it was art for the first time,” Drake said about the Grammy nod. “The competitive nature of our culture in hip-hop, they viewed it as art and they honored it, because they didn’t see the threat level in what he was saying. Whenever I’m competing, they think it’s going to spill out on the street.” (“Drink Champs”)

Last December, Meek appeared to fire off a subliminal over Drake’s Grammy nod.

Drizzy snagged a nomination for his “Back 2 Back” diss song in the “Best Rap Performance” category.

50 Cent previously said Meek’s decision to stay mum amid Drake’s “Charged Up” and “Back To Back” diss songs hurt him.

“Even when you play chess on the clock you have to think faster, you have to make moves. You canÔÇÖt sit and just look at the board – this is really interesting, I saw an artist that I knew was a talented rap artist, poke fun at another artist, and then when the guy lashed back at him, he wasnÔÇÖt ready. [How did Meek get it so wrong?] I don’t know. I don’t think he saw that [‘Back To Back’ diss] coming at all. [laughs] It didn’t go right. It just didn’t go right for him. It would have been better if he just responded. No response is worse. I don’t think he anticipated it going that way.” (“Tim Westwood”)