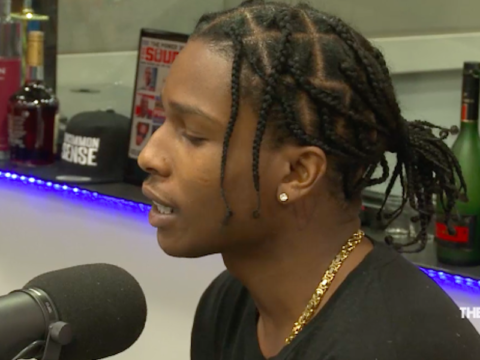 A$AP Mob leader A$AP Rocky has stepped forward to speak out on catching massive backlash on a resurfaced interview about his lack of interest in promoting police brutality awareness.

According to Rocky, the passing of longtime friend A$AP Yams largely contributed to his dicey published comments.

“I just feel like most artists don’t speak about [police brutality] and when you have the journalist saying ‘Why didn’t you speak about the Baltimore riots – the Ferguson stuff – and all this other stuff,’ and it’s continuous, question after question, you get agitated. I didn’t ask for that kind of responsibility. By default, I wake up every day as a proud black man, me venturing off and doing what I do – I know the type of person my parents raised. … It’s all about perception. At the time, I was dealing with my best friend dying. If you notice, every time I put out an album, I lose somebody. I lost with pops with my first album, I lost [A$AP] Yams on my second album. That’s what I was going through at the time.” (“The Breakfast Club”)

Rocky also responded to ex-NBA champion Stephen Jackson bashing him for the comments and saying he could no longer use the term “trill.”

“That brother regurgitated what he saw,” A$AP said. “I can’t even blame him. That was sickening from when I saw it and I know me. You know what I’m saying? All that other sh*t he’s talking about is irrelevant. But still in all, where it stands, this is a very, very serious and touchy subject and the matter on it is not funny at all. I don’t just represent my n*ggas from Harlem. I represent people that are just trying to overcome what’s going on right now. … I really do feel like a lot of people say what they don’t really feel because a lot of times – people don’t say what they mean, meant. … I’m going to continue to say what I feel.” (“The Breakfast Club”)

Footage surfaced this week of Jackson going off on Rocky.

The post A$AP Rocky Responds To Stephen Jackson’s “Trill” Ban: “I Can’t Even Blame Him” [Video] appeared first on For The Best In Hip-Hop News – SOHH.com.