Adult Star Mia Khalifa On National Anthem Drama: “If Colin Kaepernick’s The One You’re Upset With, You’re Missing The Point” 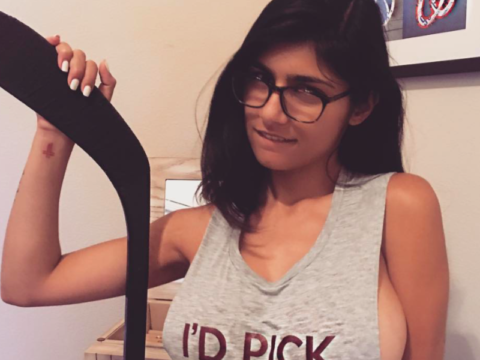 Adult actress Mia Khalifa is letting her voice be heard in the publicized national anthem protesting. The NSFW model shared some strong thoughts on the debate over NFL star Colin Kaepernick‘s publicized stance.

In Khalifa’s opinion, too many people are apologizing for bashing Kaepernick rather than defending their stance.

“Look, I get it: Things need to change in this country. But if Colin Kaepernick is the one you’re upset with, you’re missing the point. Kaepernick doesn’t piss me off. It’s all of these “respected” figures, coaches, commentators, and analysts (i.e. not Paul Finebaum) that are apologizing for voicing their opinions or back-peddling on their “poor phrasing.” Why the hell are you apologizing? If Kaep offends you with his actions to the point where you need to say something publicly, then you should be willing to stand by it with the same conviction as Kaepernick.” (Fansided)

“I can’t stand all the pressure to apologize being put on anyone disagreeing with these actions. You are not unpatriotic for having an opinion on this — no matter which side of the issue you fall on. If you think Kaepernick is doing is wrong, say it. This is supposed to be a conversation, not a competition to see who can shame the other person worse. I love the pettiness. Let’s keep running that back.” (Fansided)

This week, NFL superstar Cam Newton spoke out on the negativity surrounding CK.

The post Adult Star Mia Khalifa On National Anthem Drama: “If Colin Kaepernick’s The One You’re Upset With, You’re Missing The Point” appeared first on SOHH.com.