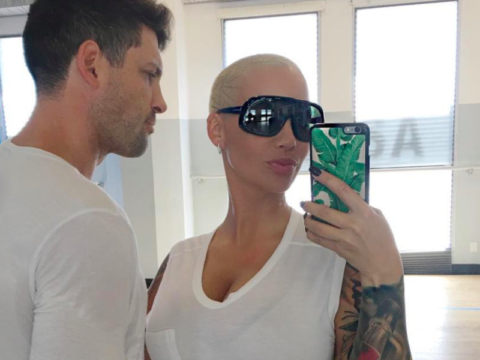 Turn Up Tuesday. It’s a day to keep turning up SOHH why not get things going with Amber Rose‘s drastic new look? Speaking of females, how about actress Lupita Nyong’o spitting Nas bars? With spitting on your mind, what about that Hillary Clinton and Donald Trump debate last night? All this coming up in SOHH Whatcha Think.

Is Amber Rose always going to be the blonde bombshell we all love? Most likely, but that’s not stopping her from changing up her looks every now and again. Her latest look is pretty amazing. Amber Rose’s Instagram has the shots:

Didn’t you think that was Jennifer Lopez at first? Is this a sexier look for Amber? Think she’ll keep this look for a minute? #SOHHWhatchaThink?

Don’t be fooled, Lupita might roast some folks in the rap game on the super low-low. Can you believe the award-winning actress can not only rhyme but spit some bars over a Nas instrumental? Lupita’s Instagram has her proof:

Are you impressed? Should Lupita do more rhyming? Think she could rhyme over a Future beat too? #SOHHWhatchaThink?

If you missed last night’s Presidential Debate, you really missed out. Big. We’re set to have a new president in the coming weeks and if there was ever a time to see these two powerhouses go at each other, it was last night. The Internet paid attention and made sure to add its own two cents. Instagram has the proof: