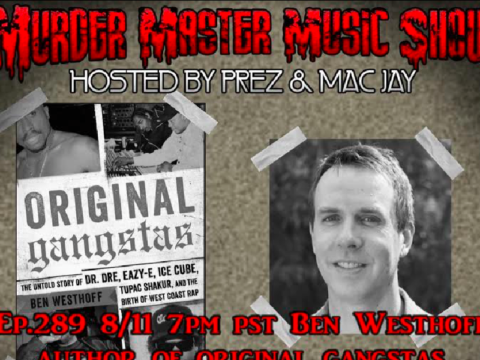 [Ben Westhoff is a well known writer and now an author after dropping his “Original Gangstas” book which is pretty much a guide to the legacies of West Coast hip-hop. Myself and my co-host Mac Jay welcomed Ben on the show twice over the last few weeks, check out what he had to say.]

1. Did The Nation Of Islam Administer AIDS Drug Kemron To Eazy-E?

It was something that was touted as the cure for AIDS. Remember this was 1995 and people didn’t know much about HIV or AIDS back then. Looking back there was no real evidence that this was a cure, it was from Kenya and brought to the US and people thought that it might be the ticked! It was called Kemron. Some members of the Nation of Islam that were watching over easy were helping administer Kemron to him with hopes that he would feel better. From what I understand Tomica, his Wife who he married on his death bed, didn’t want to keep administering this because she didn’t know what it was, it wasn’t approved by US Doctors, for all she knew it could have been making him worse. I’m not of the opinion that Tomica was trying to kill him or anything like that but still some people who were close to him thought that this was a hail mary pass and they should keep giving this drug to him. It was not long when he passed away after that, there were people that were upset about that but at the same time it’s 20 years later and we still dont have a cure for AIDS, but there is people who thought it would temporally keep him alive.

The question of did Puffy offer a million dollars to kill Suge Knight and Tupac is more of an open question. It’s the word of Puffy verses the word of Keefe-D who was the Uncle of Orlando Anderson, and he is the one that said Puffy offered them one million dollars to take out Tupac and Suge. It was 500K for Suge and 500K for Tupac. I don’t buy that Suge had anything to do with Tupac’s murder, Suge genuinely loved Tupac and Suge was right there in the line of fire.

3. Tupac Thought Of Death Row As An Army That Would Be On His Side!

I don’t think it was just for the money, I think in the beginning was that Death Row promised they could get him out of prison. They raised the money to get him out of there, but he also saw Death Row as an army that would be on his side. He knew that Death Row could protect him. Tupac was never really about money like that. It’s possible that while he was in prison he stopped being the more positive minded Tupac that we know from his other albums and he shifted more towards the darker side. Plus he wanted to make music with Dre too. He probably knew for the long term that it wasn’t gonna end well.

4. Biggie Wanted Tupac To Manage Him

“Tupac was already a big star when Biggie got started. Tupac kind of took Biggie under his wing. Biggie’s career wasn’t taking off how he wanted it, and Biggie asked Tupac if he would be his manager. Tupac said no stick with Puffy he will get you to where you want to be. He mentored Biggie so much but he believed that he double crossed him (when he was shot at Quad Studios)”

5. Was Eazy-E Trying To Sign Tupac & Thuglife to Ruthless?

“Eazy-E was trying to recruit Tupac to Ruthless Records and he made a really strong effort to do that. He was also courting Thuglife to come onto Ruthless. If Eazy had not had died of AIDS many people think that Tupac would have signed with Ruthless when he got out of prison instead of Death Row.”

It was a crazy situation when Eazy was in the hospital and then when he died. The state of California enlisted this third party company to manage Ruthless until his estate could get sorted out in court. There was Tomica’s interest, and then there was this other guy named Ernie Singleton who was hired to take on Ruthless, but meanwhile someone changed the answering machine at Ruthless and they said “If you reached this number you should call this number inCanada”, and meanwhile someone in Canada had this office and they were claiming to be the real Ruthless and we still don’t know who it is but they ended up with a briefcase of unreleased Eazy-E music and they were threatened by the FBI and were told to turn it over. I looked at this FBI file and a lot of stuff was blacked out so the music could still really be out there.

2. I Found No Evidence Of Jerry Heller Stealing From N.W.A.

I really went through all of the records and first of all neither Ice Cube nor Dr.Dre ever sued Jerry Heller. You would think if he really stole from them they would have filed a lawsuit. Another thing to consider is that it wasn’t Jerry who ultimately made the financial decisions, Eazy owned the label so at the end of the day it was up to Eazy. From all my research of digging through files and talking to people I have found no evidence that Jerry Heller stole anything from Eazy or anyone in NWA and I don’t think that it is right that people think that he did.

I dont think he had come to the conclusion (of Puffy and Biggie being involved), yet, I think it went up there because he was hurt and needed help. Biggie came to visit him at the hospital and he spoke with Tupac’s Dad and to this day Tupac’s Dad thinks Biggie is innocent and didn’t know about it before hand. It wasn’t later until Tupac was in prison that he started hearing all these rumors about Biggie knew about it in advance and that is when he was paranoid and told Suge Knight and wanted to go to war with Bad Boy.

Ice-T had this heavy metal side group called Body Count and they made this song called “Cop Killer”, and I think Ice-T was at home playing Tecmo Bowl when he heard that the Vice President Dan Quail was talking about him on TV going off on how it was such a horrible thing that shouldn’t be tolerated by his record label. Charlton Hesston gave a speech at the Time Warner stock holders meeting, and Time Warner was the label that owned Ice-T’s label. Ice-T started getting bomb threats! They started holding boycotts of amusement parks that were owned by Time Warner and the whole thing started spiraling out of control. Ice-T said his own Daughter was pulled out of middle school and asked if her Dad was in terrorist organizations. Things just got way too hot and finally Ice-T agreed to pull the song off the record and he started giving it away for free at concerts..

I do know that a lot of people were suspicious about all of this particular Tracy Jernagin who is the Mother of one of Eazy’s children named E.B. She was really upset that there was no autopsy, that the marriage license was private so no one could see it and that a lot of people including the mothers of a lot of Eazy’s children and the children themselves were not allowed up to his hospital room while he was on his deathbed, so it raises a lot of questions in a lot of people’s minds about what was happening during his last few weeks. Another person I talked to was Sharice Henry who is Eazy-e’s assistant and she was very suspicious of stuff that was going on during this time too. She saw Eazy revising his will one day and and she thought that was a bad idea and he had a new lawyer who was taken on by Tomica, and Sharice didn’t think he should be revising his will at this stage when he was so sick. Ultimately Tomica got control of Ruthless which was valued at $30 million dollars at the time and she took control of the estate.