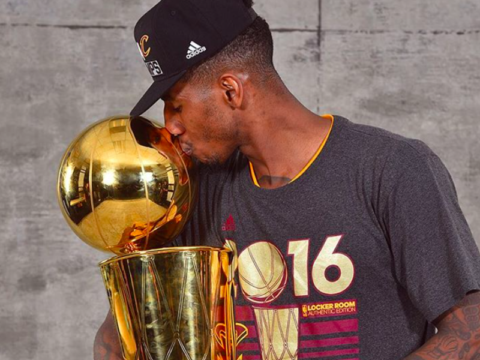 Cleveland Cavaliers‘ Iman Shumpert is going to turn all the way down during the national anthem this NBA season. Shump has revealed he will spark social injustice awareness in the coming weeks.

The 2016 Finals champion has rapped about his intent to take a knee during the national anthem when the NBA tip-off starts next month.

In a new song titled “His Story” that dropped today, Shumpert rapped, “you best believe I’m going to take me a knee for the anthem.” Many athletes, including Megan Rapinoe of the U.S. Women’s National Soccer Team and Brandon Marshall of the Denver Broncos, have followed Kaepernick’s lead by not standing during “The Star-Spangled Banner” in order to protest police treatment of blacks in America. (Complex)

A few days ago, fellow Southern rapper Killer Mike saluted Kaepernick for protesting the national anthem at an NFL game.

there was a pre game speech from our president commemorating those that lost their lives on that tragic day on 9/11. we stood for that.

don't put your hatred in our hearts. I love this country. don't let the love for a symbol overrule the love for your fellow human.