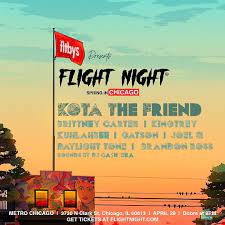 Less than 48 hours out from Chicago Flight Night, the buzz around Kota the Friend’s music festival is reaching its peak.  We got in touch with the fltbys team for some final announcements regarding tomorrow’s show. Tickets are now officially sold out. 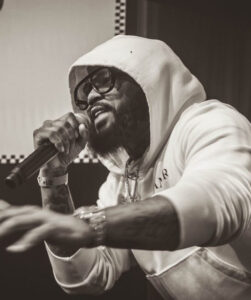 We were unable to reach Brandon Ross for his artist spotlight.  However, Ross will only add to a stacked lineup of Chicago’s finest independent talent.  Brandon Ross has opened for artists such as Lil’ Durk, Migos, Tory Lanez, Juicy J and more.  He has a vested interest in writing lyrics accessible for the youth and underrepresented populations of his city.  His music videos have accumulated millions of views worldwide, with several appearing on BET.

Chicago’s own DJ Ca$h Era will be the house DJ for Chicago Flight Night.  Ca$h Era is a producer at 720AM WGN Radio and was named Chicago’s Best Hip-Hop DJ by the Chicago Reader in 2021.

DJ Ca$h Era is a representative of the Jordan Brand’s Global Women’s Collect and has performed alongside notable talents such as G Herbo, Taylor Bennett, Jamila Woods, Ghostface Killah, and more. While timetables are speculative, we’ve heard that this will be the approximate program for Friday night.

We hope to see many of you in Chicago tomorrow and stay tuned as Today’s Hip Hop will be providing a full recap of Chicago Flight Night early next week.