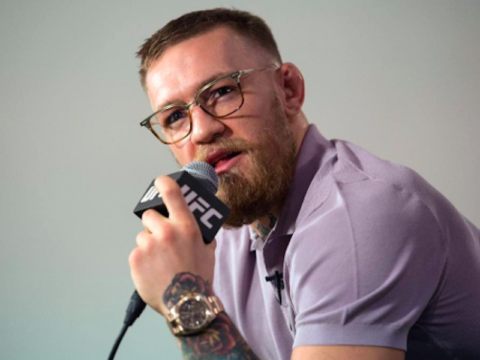 UFC champion Conor McGregor is not giving up on his dream bout. This week, the Irish MMA superstar teased fans about the possibility of facing off against retired boxer Floyd Mayweather Jr.

During a press conference for UFC 205, McGregor did not hold back the possibility of getting Mayweather to fight him.

Conor McGregor with the line of the night. #UFC205 https://t.co/sQAQU4fG38

Earlier this month, Mayweather downplayed the idea of a McGregor match happening.

“Floyd and I are really good friends, but we argue like regular people argue. The difference is when we have disputes, it winds up on CNN or Instagram. I can cuss him out, call him names, say whatever I want to him, but he’s my little brother. Every fighter says he’s going to retire—what’s left when you fight the biggest, most highly anticipated fight? But I do think he’ll fight again.” (Vanity Fair)

The post Conor McGregor Still Down To “Drag Floyd Mayweather” For 1-On-1 Fight [Video] appeared first on SOHH.com.

Conor McGregor Still Down To “Drag Floyd Mayweather” For 1-On-1 Fight [Video] : SOHH