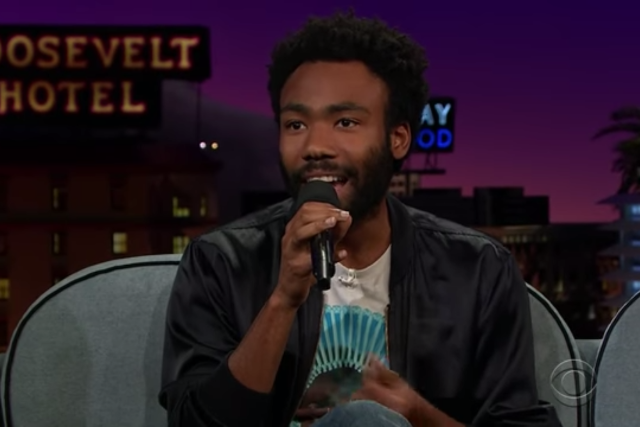 This is my favorite moment in music this week (and for some reason, I’m a little sad I didn’t catch this until late last night.)

The other night on James Corden, Donald Glover was a guest alongside NASCAR driver Jimmie Johnson. It was Glover who stole the show musically with this impromptu jam session above with Corden’s band leader Reggie Watts.

And trust that it’s impromptu as Glover increasingly feels the funk and name drops Corden a couple times throughout. It peaks when Glover rises out the couch into some MJ dance moves. This, combined with his high-pitched vocals, reminds me of how he commanded the stage at Pharos a couple weekends ago. (I’m still impressed by that set. Apparently, Glover said in the interview portion that he doesn’t know when that album will come out and he’s even still working on it. Couldn’t find video to review it myself though.)

Glover’s hot streak continues with this, especially for those fellow tribal members who experienced Pharos, and of course the critically acclaimed Atlanta premiering to record viewers*. Glover’s improv and music sides clash again with this moment with host Corden, trying to sing Seal’s “Kiss From a Rose” without really knowing what he says.

*Atlanta is officially cable’s biggest comedy debut since 2013’s Inside Amy Schumer. According to Vulture, Atlanta’s premiere episode, which aired September 6, drew 1.8 total million viewers in the target demographic of viewers under 50, with 92% of those sticking around for the second episode. The show, which is already a huge favorite among critics, is also FX’s biggest premiere for any half-hour show since 2011. (via Miss Info)

ICYMI: Watch Episode One of Atlanta