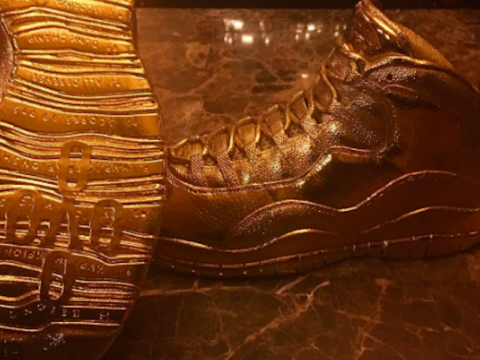 OVO Sound leader Drake reportedly did not drop $2 million on a pair of all-gold everything Air Jordan 10 sneakers.

According to reports, Drizzy likely did not pay more than $30,000 for the exclusive sneakers.

We’re told reports that the kicks cost $2 million and weigh in at 100 lbs are just plain wrong. Artist Matthew Senna — who made the shoes — fetches between $3,500 and $30k a pair. Drake’s shoes are on the higher end. We’re told the shoes aren’t made entirely from gold. They’re a mix of gold and other materials, including parts of real shoe. Each shoe is around 16 inches long and weighs 20 lbs. (TMZ)

A few days ago, Drizzy showed off his gold Air Jordan 10s.

The post Drake Didn’t Drop $2 Million On Those Gold Air Jordans appeared first on For The Best In Hip-Hop News – SOHH.com.