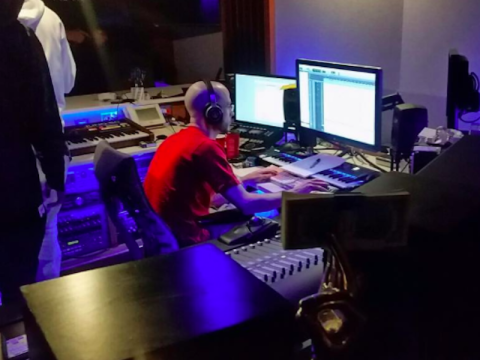 According to 40, Yeezy’s presence on the track’s credits isn’t as direct as hip-hop heads may think.

“Me and Kanye produced the track,” he told Genius exclusively. “I made it from some drums he had given me. Not quite the elaborate story the world is looking for.” The “Lyricist”/“Writer” credits that appeared on Tidal doesn’t mean that Kanye had a hand in penning any of Drake’s rhyme. “When someone contributes to a song as a producer/musician they are considered a writer, as he is alongside Noah Shebib and the other musicians on the song,” a source close to the situation told Genius. (Genius)

Weekend reports surfaced about Yeezy having a role on Drake’s infectious anthem.

Today, an interesting detail surfaces: in the credits listed on Tidal, Kanye West is named as a lyricist, composer, and producer of the song. Now, who knows what Kanye’s involvement was and if he had any idea what this song was going to turn into. Kanye recently dedicated a song to Kid Cudi while performing on the Saint Pablo tour, so it’s safe to say he wants no part in any Cudi beef. (Pigeons & Planes)

Last week, Kid Cudi responded to a diss from Drizzy off his new song.