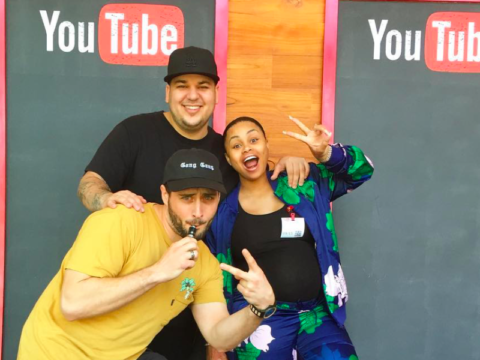 Working Wednesday. It’s a day to put in a lot of work SOHH why not get things going with Drake rolling with Usain Bolt? Speaking of superstars, is Rob Kardashian giving out superstar loans? With Rob on your mind, does Blac Chyna have a thing for TV personality Bill Maher? All this coming up in SOHH Whatcha Think.

Do you get street cred from hanging out with Drake? Definitely not but there’s nothing wrong with hanging out with one of the biggest hip-hop stars in the game these days. That’s exactly what Usain Bolt had on his mind. Baller Alert has the footage:

Is there anyone not messing with Drake? Does Drizzy need any more co-signs? Who hasn’t Drake rubbed elbows with? #SOHHWhatchaThink?

If it wasn’t bad enough Rob Kardashian decided to give out his family’s information on Twitter, it looks like he’s giving out major loans to people asking. But $80,000? Rob Kardashian’s Twitter has the proof:

I got u send me your accounting and routing # and send me your bank i got u wire transfer https://t.co/LURbAkHvcW

YO IM DEAD ASS THO HOLD ME DOWN MY GUY ..ALSO COME ON THE SHOW WE LIT 10/17 @VICELAND https://t.co/mvzoiujkbI

Do you believe him? Is Rob wild enough to lend that type of money on Twitter? Are you taking this serious? #SOHHWhatchaThink?

Do you mess with Bill Maher? More importantly, are you riding with the whole iPhone 7 hype? Looks like Bill used a key Blac Chyna reference when comparing it to the iPhone 6. Blac Chyna’s on it:

Is Blac Chyna really invading pop culture like that? Think her buzz is going to grow even bigger? Are you messing with the new iPhone 7? #SOHHWhatchaThink?