The Griselda big three, Conway the Machine, Benny the Butcher, and Westside Gunn have announced their ‘Claire’s Back Tour’ for this spring.  Following an April 27th appearance at Coachella, the crew will hit the road for their own performance, starting on May 10th in Chicago.  Cleveland-born rapper Doe Boy will open all shows.

The tour will stop in ten cities including Boston, New York, DC, Atlanta, Dallas, and San Francisco, before winding down June 3rd in Los Angeles.    Tickets are available Friday, March 25th at 10:00 am EST on the Griselda website. 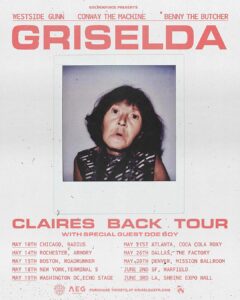 The ‘Claire’s Back Tour’ marks the first time in two years the trio has toured nationally. However, it comes amid some turmoil, as Conway the Machine is attempting to renegotiate his deal with Griselda.  Last week on The Breakfast Club, Conway told hosts Charlamagne Tha God and Angela Yee that his former deal was not in his favor. “Honestly, I’m hoping that things will work themselves out with Griselda. When we did that shit in the beginning, I really wasn’t all the way,” Conway said. “I didn’t even read that contract, bro.  I just signed that shit and moved on. But you know, unfortunately, the contract wasn’t in my favor. So now, going forward, it’s time to redo all that. I gotta make sure if it’s in my favor now.”  You can watch the full Breakfast Club interview below:

Contract aside, Conway reassured fans he is still proud of the label he helped build with Westside Gunn.  Nothing like a U.S. tour to show unity within one of hip-hops most respected independent labels.