Gucci Mane Reveals Why He Sold Young Thug’s Contract: “I Didn’t Want Nobody To Take Advantage Of Him” [Video] 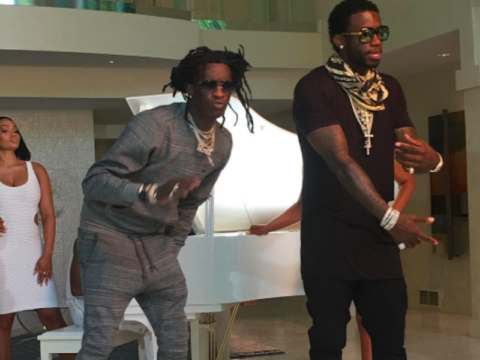 Atlanta rapper Gucci Mane has come clean on his relationship with Young Thug. This week, Guwop explained why he decided to sell his protégé’s recording contract during a publicized stint behind bars.

According to Gucci, he did not want to hold back Thugger’s stardom and sold his deal to help the Georgia native flourish on his own.

“He was signed to me,” Gucci confirmed referring to Thugger. “Nah, I sold his contract to my friend Todd [Moscowitz]. To be honest, I talk to Thug, I really care about Thug. Thug is super talented and I been seen it. I don’t want you to think I’m trying to be funny. I felt like I was getting wind of him dealing with a lot of different people and I called him and told him, ‘Listen. I’m gonna do this deal with Todd because I want you in you in the best hands.’ I said, ‘He’s going to make it so you can push your own YSL label and go as far as you can go.’ And look what happened. I didn’t want nobody to take advantage of him. I wanted him to be his own boss. I told him, ‘Listen, at the end of the day, Young Thug is Young Thug records. You got to boss up. You got the ring. These people really believe in you.’ That’s when I had the conversation with him and then he was down with it – that’s my partner, that’s my dog.” (Hot 97)

Back in July, Thugger credited Mane for fueling his music grind and rise to stardom.

“He taught me everything,” Thug says. “Most definitely he taught me don’t never stop. He was rapping every day, all day and all night. He’ll be mad at me if I’d leave the ‘yo [the studio]. He’d be like, ‘Man, you dead broke and you goddamn running around and I’m up a whole lot of millions and I’m working every day. How the h*ll that look?’” Gucci chimes in, cheesing: “I’d tell Thug all the time, ‘Where you goin?! You see me in here every day, why you goin’ so soon?’” (The FADER)

Over the summer, Gucci and Thug teamed up for a studio session.

The post Gucci Mane Reveals Why He Sold Young Thug’s Contract: “I Didn’t Want Nobody To Take Advantage Of Him” [Video] appeared first on SOHH.com.

Gucci Mane Reveals Why He Sold Young Thug’s Contract: “I Didn’t Want Nobody To Take Advantage Of Him” [Video] : SOHH