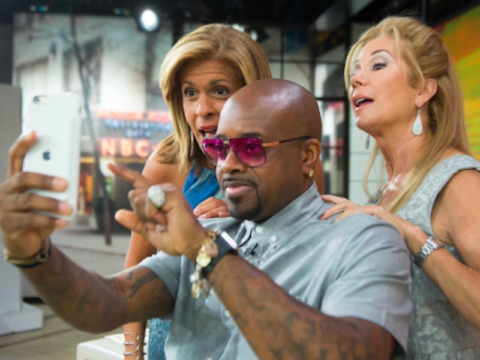 Music mogul Jermaine “JD” Dupri recently talked about his relationship with Jay Z and revealed Young Hov has a new album in the works.

Although slim with his words, Dupri announced Jigga has a follow-up to 2013’s Magna Carta Holy Grail album coming.

“Me and Jay have, like, conversations that I’m sure IÔÇÖm probably sure he don’t have with nobody else because that’s how we met each other,” JD said. “Our relationship from ‘Money Ain’t A Thing’ came from him taking something on a mixtape that I heard that he did repeating, ‘I’m gonna make you dance,’ something he said that sounded like what I did on the Dru Hill [song ‘In My Bed’] like, ‘Oh, dude be listening to me.’ I’m thinking this is, ‘Can’t Knock The Hustle’ dude – I’ve spoken to Hov, even at the Beyonc├® concert. I know the name of Hov’s new album and everything right now. [laughs] Yeah, like, me and him, we’re good. [Will I get a beat on there?] It might be done. I’m just saying. I don’t know.” (Rap Radar)

A few months ago, reports claimed Jay had finished up an album with R&B wife Beyonc├®.

Sources confirmed exclusively to Page Six that Jay and BeyÔÇÖs surprise album is complete, and it will drop on his streaming service Tidal very soon. One source told us, ÔÇ£Jay and Beyonc├® were never going to do an interview to address all the questions that came up after ÔÇÿLemonade.ÔÇÖ ItÔÇÖs more their style to respond through music.ÔÇØ (Page Six)

In May, rumors of a Jay/Bey collaborative effort coming out soon developed online.

Long before there was Lemonade, Beyonce and Jay Z attempted to put out a joint album, sources tell Billboard, and the power couple still may see the project through in the near future. According to a source, Jay Z and Beyonce had “nearly finished” a record together but never quite did. “The label wouldn’t agree to the joint album,” says an insider of Beyonce’s longtime home at Columbia Records, a subsidiary of Sony Music. But a Sony source counters that claim, insisting that the company is “open to” partnering with the husband-and-wife team for such a project. (Billboard)

Sean Carter, aka Jay-Z, is allegedly already at work on a new album, which explores his side of the marital schism Beyonc├®’s Lemonade covered. This news, of course, is according to US Weekly, so until we hear it from Mr. Carter’s lips, we should probably take it with a pinch of lemon juice. (Ugh, sorry) Regardless of the validity in this claim, do we really need to hear Jay’s side? (PAPER Mag)