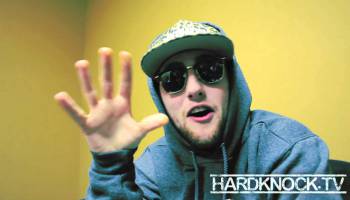 Just about a week after Lil Wayne hinted at retirement, Kendrick Lamar delivers a message for one of his favorite rappers.

In the middle of a recording session, K-Dot apparently stopped to film a series of videos for Weezy, spitting classic Tunechi verses, and adding a statement about Wayne’s perceived retirement.

“Talk about retiring and shit,” Kendrick says. “Fuck that, n**a. Retiring, qutting rap, whatever you want to call it, n**ga, fuck that, ni**a.”

K-Dot has been outspoken about his Wayne appreciation in the past. In March, he even called Weezy “the greatest.”

“We was just huge, still to this day, huge Lil Wayne fans,” he told The Coveteur. “Lil Wayne is the greatest. Not only because of his music but also because of the culture he put behind it. It was a big part of what he was talking about, so we always hold Lil Wayne in high regards. Juvenile as well. And yeah, it’s the impact of them man. To be a part of it the same way he was a part of it years later is just a great feeling.”

Weezy’s response? “Kendrick Lamar a real one,” he wrote. “#Respek.”

Kendrick Lamar a real one #Respek

In 2009, K-Dot also redid Wayne classics for a mixtape titled C4 as a tribute to Tunechi’s Carter series. The project featured an early co-sign from Wayne for Kendrick and his TDE brother, Jay Rock.