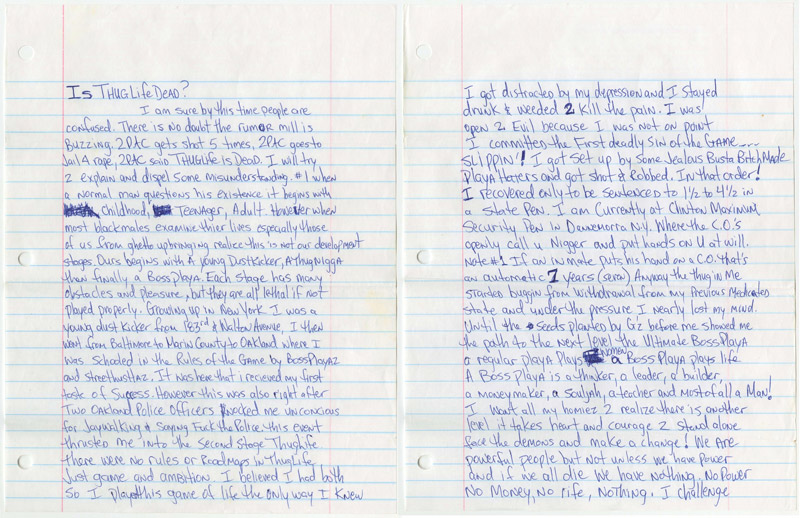 More than 20 years after Tupac Shakur’s death, the late rapper remains in high demand. On Saturday (Oct. 29), a four-page letter handwritten by ‘Pac was auctioned off for an impressive $172,750.

According to a statement from Goldin Auctions, the company responsible for the sale, the letter was part of a 10-lot Tupac Shakur collection including plaques and contracts, which sold for $206,625 as a whole.

“This remarkable letter from Tupac exemplifies what’s thrilling about the auction business as this recently discovered find caught the eye of several serious and well-heeled bidders who went back and forth for hours until this record-setting price was reached,” explained Goldin Auction founder Ken Goldin. “We congratulate all of our consigners and bidders on being part of this historic night.”

As reported earlier this month, the letter was written in 1995 to Nina Bhadreshwar, who worked at Death Row Records.

“I did not begin thug life,” ‘Pac writes in the letter. “I just personified it. I couldn’t stop it if I tried but in my heart the thug ni**a has advanced 2 be a Boss Playa. So No Thug Life is Not Dead but in my heart it is. If U are sharp u will learn from this.”

Tupac died in a still-unsolved shooting around a month after writing the letter and the essay was never published.

According to Goldin, this could be an auction record for any Tupac item.