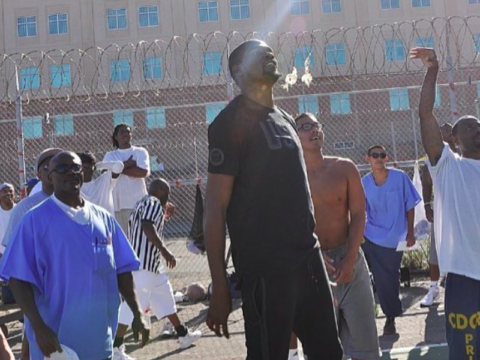 The Golden State Warriors put a smile on a lot of faces after a weekend visit to San Quentin State Prison. The star-studded organization came through for an annual pickup game at the renowned facility.

On Saturday (September 24), Warriors’ Kevin Durant and Draymond Green showed up at the prison.

While Warriors President of Basketball Operations and General Manager Bob Myers headlined the Warriors contingent on the court, Warriors players Kevin Durant and Draymond Green took in the action from the sidelines. There, they sat among the inmates to watch the action, sign autographs and even play some dominos. (NBA)

Recently, Durant talked about getting Rick James and 2Pac-inspired tattoos.

“Rick James,” KD said when asked if his latest tribute artwork was him paying homage to the late singer or Comedy Central’s “The Chappelle Show.” “Yeah, my earliest memories of music was grandma cleaning the house listening to Rick James, Sam Cooke, Teddy Pendergrass, so that always caught my ear. There’s a lot more tattoos coming but you weren’t supposed to see the first two.” (“Any Given Wednesday”)

Earlier this month, buzz developed about Durant getting a Rick James tat.

Back in July, Durant briefly addressed his now-infamous 2Pac tat.

“Aw, man, you weren’t supposed to see that,” Durant said, sheepishly, as if he had hoped to keep the image hidden under tights and socks, or planned a grand unveiling at a later date. The next day, however, Durant left the tattoo exposed for anyone to see and even offered an explanation for how Shakur’s lyrics helped inspire the body art, even if the Notorious B.I.G. was his all-time favorite rapper. (Yahoo! Sports)