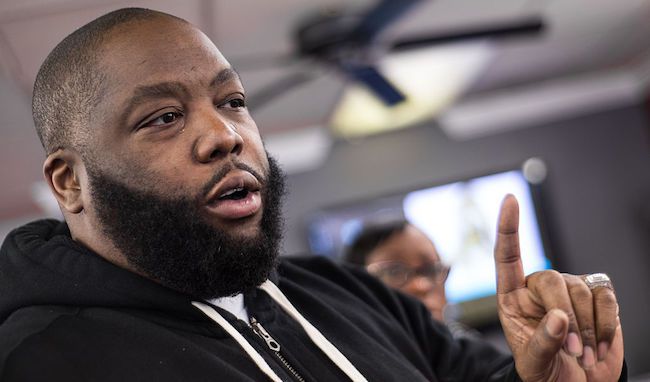 Killer Mike, in a powerful interview with Atlanta’s Hot 97 radio station, offered up a slew of solutions for the ongoing race problems of America. A highly touted quote from that interview was one about economic empowerment. Mike wanted people to start supporting black owned banks by having black folks open up accounts at Citizens Trust, the oldest African-American owned bank in the country.

Apartheid ended in South Africa because students in America said we not flying Delta anyore. We not drinking coca-cola anymore. WeÔÇÖre not supporting any corporation that supports the apartheid and enslavement of people that look like us. Once again, right now, I ainÔÇÖt saying ÔÇÿMarch, hold hands, speech,ÔÇÖ IÔÇÖm saying take your money out of this dogÔÇÖs hands.”

His message managed to hit its targets directly and it appears that people have also heeded his call. It’s been reported that since Mike’s interview, over 8,000 new accounts have been opened at the bank. As Hip-Hop Wired points out, there’s a minimum of $100 needed to open an account, that’s a grand total of $800,000 that’s been moved to the bank in less than a week.

“There have been reports and talk on social media that the bank has overwhelmed by the number of people who have been walking in and opening new accounts. But, the long lines have not discouraged anyone.”

The influx of new cash caught the eye of Cynthia N. Day, the CEO of Citizens Trust Bank, who took to Twitter to “thank Killer Mike for his call-to-action.”

We thank @KillerMike for his call-to-action. Together, we can change the conversation. Cynthia N. Day, Pres and CEO pic.twitter.com/nrMs2ALG5x

The ATLien took to Instagram to thank everyone who followed his words. He also stressed that this was just the start and that the target goal far exceeds the sum of what’s been moved thus far. The other half of the Run the Jewels duo wants $100 million in accounts.

It’ll be interesting to see if the original goal can be reached and how this will impact the African American community. It’s notoriously difficult for black people to get bank loans, especially ones for small businesses. If Citizens Trust can leverage their newfound capital to help black small business owners, in addition to┬áloans for other purposes, black economic empowerment may become a reality.

Watch Mike’s interview again below if you missed it previously and read more about it here.

Killer Mike Reportedly Has Inspired People To Move Over $800K To Citizens Trust Bank In Only Five Days : UPROXX