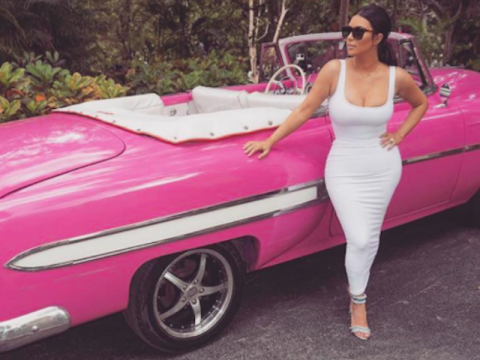 Reality TV star Kim Kardashian is sticking by her hip-hop husband Kanye West‘s side amid a publicized feud between them and country singer Taylor Swift over the reference-heavy “Famous” single.

In a new video clip, Kim K defends calling out Swift in a recent GQ interview and felt the need to finally speak out.

ÔÇ£She totally knew that that was coming out. She wanted to all of a sudden act like she didnÔÇÖt,ÔÇØ Kim says about Taylor SwiftÔÇÖs reaction to Kanye WestÔÇÖs song Famous. Kim says TaylorÔÇÖs emotional wound is nonsense and that thereÔÇÖs video proof, because a videographer was actually filming theirÔÇôÔÇôTaylor and KanyeÔÇÖsÔÇôÔÇôphone call and that Taylor ÔÇ£totally approved that [line in the song about Swift]ÔÇª. I swear, my husband gets so much sh*t for things [when] he really was doing proper protocol and even called to get it approved. What rapper would call a girl that he was rapping a line about to get approval?ÔÇØ (GQ)

Swift, Kim insists, ÔÇ£totally gave the okay. Rick Rubin was there. So many respected people in the music business heard that [conversation] and knew. I mean, heÔÇÖs called me a b*tch in songs. ThatÔÇÖs just, like, what they say. I never once think, [gasping] ÔÇÿWhat a derogatory word! How dare he?ÔÇÖ Not in a million years. I donÔÇÖt know why she just, you know, flipped all of a suddenÔÇª. It was funny because [on the call with Kanye, Taylor] said, ÔÇÿWhen I get on the Grammy red carpet, all the media is going to think that IÔÇÖm so against this, and IÔÇÖll just laugh and say, ÔÇÿThe jokeÔÇÖs on you, guys. I was in on it the whole time.ÔÇÖ And IÔÇÖm like, wait, but [in] your Grammy speech, you completely dissed my husband just to play the victim again.ÔÇØ Were they in touch after that? asks Weaver. ÔÇ£No. Maybe an attorneyÔÇÖs letter she sent saying, ÔÇÿDonÔÇÖt ever let that footage come out of me saying that. Destroy it.ÔÇÖÔÇØ (GQ)

The post Kim Kardashian Still Won’t Stop Dragging Taylor Swift: “I So Had It” [Video] appeared first on For The Best In Hip-Hop News – SOHH.com.