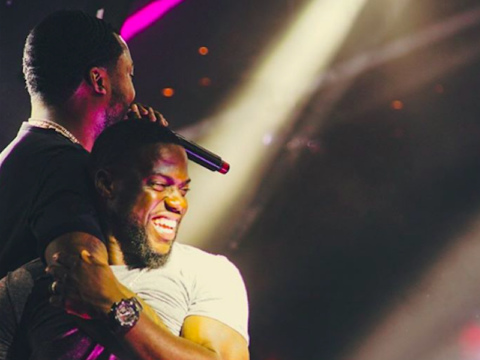 Turnt Thursday. It’s a day to stay turnt SOHH why not get things going with Meek Mill finally winning a rap battle? Speaking of hip-hop artists, what do you think about NBA player-turned-aspiring rapper Iman Shumpert putting Teyana Taylor up as his own championship trophy? With NBA players on your mind, are you trying to land a flight with Scottie Pippen? All this coming up in SOHH Whatcha Think.

With a rap peace possibly coming together, will we ever get to see Meek Mill really battle Drake? Probably not but he did show off his battle skills against none other than … Kevin Hart? Complex has the footage:

During his performance at the Las Vegas Drai’s nightclub Sunday, the 29-year-old rapper invited comedian Kevin Hart on stage for an impromptu rap battle. The Philly natives kept it friendly and lighthearted, with Meek initiating the battle with: “Popping up on my stage I’m like, ‘What is the odds?’ He must be on molly or something, look at his eyes.” (Complex)

Do you think Meek Mill won this? Did Kevin Hart shock you with the rhymes? Is this something you’d take seriously or nah? #SOHHWhatchaThink?

Have you watched the new Teyana Taylor “Champions” Temix? For some odd reason, Iman Shumpert hasn’t tied the knot with her yet but he’s probably getting ready to based on his reaction to the video. Iman Shumpert’s Instagram has his thoughts:

Do you agree with him? Is this Teyana Taylor’s most NSFW clip yet? Is Iman crazy for not wifing her yet? #SOHHWhatchaThink?

Do you want to meet Michael Jordan? SOHH do we, but the next best thing might be Scottie Pippen and it turns out there’s a way you can actually spend some quality time with him this week. PR Company 5WPR has the info:

JetSmarter, the fastest growing private jet company in the world announced today the latest in its “celebrity shuttles” with the launch of a special day-trip on Friday, September 9th with NBA Legend Scottie Pippen to and from Springfield, Mass for a trip to the Basketball Hall of Fame Induction ceremony.

JetSmarter members will depart New York City at 4 PM and return at 11:30 PM.

Pippen, a JetSmarter member will discuss basketball during the hour-long flight. They will attend the Naismith Basketball Hall of Fame induction ceremony where Pippen will join Phil Jackson for the ceremonial role of Bulls chairman Jerry Reinsdorf entering the Hall of Fame.

“Joining Scottie Pippen on a day-trip is a dream-come true for basketball fans, and our members will have an unforgettable experience. Our members are busy people and use our planes to do many things – whether to fly in and out of cities for meetings, vacations, fashion shows, or the Basketball Hall of Fame,” said Sergey Petrossov, President & Founder of JetSmarter. “This trip is part and parcel of our mission of making travel fun again.”

Are you going to cake up and try this out? What would you ask Scottie Pippen? Is this worth the time if you get to really talk to the Hall of Fame legend? #SOHHWhatchaThink?