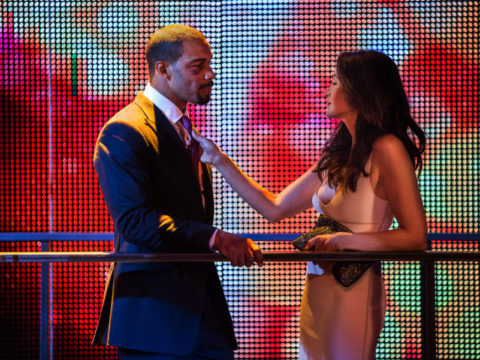 In tonight’s episode Tommy wants everyone to know that he is the boss, Lobos is alive and Jamie wants Angela to meet his kids.

Season 3 starts off with a slap in the face to all Tasha fans, as we see Jamie walk into the club with Angela on his arm. This scene is similar to the original opening scene of Season 1, where Jamie walks out with Tasha.

On the other side of town, Tommy intervenes in a dispute between his crew and an opposing crew who was under Ruiz’ control. Tommy, being the hothead that he is, starts a fight which ends with his crew questioning the whereabouts of Ghost which irritates Tommy.

While at work, Jamie notices a bloody “La Arana” card in his desk. It’s the same card that Ghost left behind in a series of murders he did in the past. Also, Jamie notices that Tommy is stalking him from afar. While watching past security footage, Jamie sees a woman put the “La Arana” card in his desk. When Jamie decides to pay a visit to her home he discovers that she has been murdered.

Ghost pays close attention to details. Look at how he figures out how to sneak into the employee’s building. Very clever.

Angela and the Fedz put Lobos under a John Doe Prosecution which would allow the Fedz to pretend that Lobos is dead and in protective custody. Angela requests to meet Lobos face to face which Mike turns down, however, Lobos wants to meet Angela, face-to-face.

During a quickie with Holly, Lobos calls Tommy to remind him that Tommy has not killed Ghost yet. Tommy informs Lobos that he needs more product. Lobos tells Tommy not to tell anyone that he is alive and that Ghost must die soon or else Tommy’s family (Holly and the dog) will die.

Turns out that Kantos was the one who hired the woman that slipped the “La Arana” card into Jamie’s desk. During a meeting with the club staff, Jamie fires Kantos in front of everyone and throws him out.

Angela is not sure if Jamie is 100% out of the drug game and confronts Jamie about Julio visiting the club. During the conversation, Angela also confirms to Jamie that Lobos is alive. Angela tells Jamie that Lobos believes that another gang ordered the attack making Jamie ‘safe.’ Jamie is uncertain.

Unbeknownst to Holly, Tommy comes home to discover his dog has been killed. Tommy is devasted and realizes that Lobos isn’t playing games and that Holly will be next.

At the end of the episode, an uneasy Jamie calls Tommy and tells him that they need to speak and refers to himself as Ghost.

Throughout this episode, Tommy is confronted about his relationship with Ghost. Even when saying “fuck Ghost”, Tommy has a difficult time saying it. Joseph Sikora does an excellent job portraying Tommy, even developing a nervous twitch throughout the episode.

What do you think will happen next episode? Will Tasha allow Angela to meet her kids? Will Holly die next episode?

The post Power Recap – Call Me Jamie, Season 3, Episode 1 appeared first on For The Best In Hip-Hop News – SOHH.com.