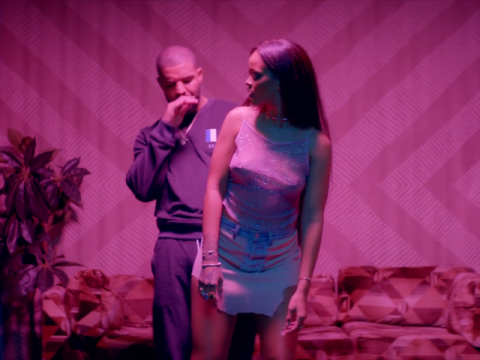 Grammy winners Rihanna and Drake can’t get enough of each other. The rumored couple caught photographers’ attention last night (September 7) in California.

Reports claim RiRi and Drizzy partied it up at a Los Angeles nightclub following the 6 God’s Summer Sixteen Tour performance.

The pair, who are believed to be an item, were spotted arriving at celeb nightspot The Nice Guy fresh from his concert at the Staples Centre in Los Angeles. Rihanna appeared to even have her drink from the show, arriving clutching a red glass filled with a red liquid. (The Mirror)

The uber-close pals recently had matching shark tattoos placed on their bodies.

A day after cameras caught Drizzy and RiRi in New York City, the reunited couple flew down to Miami, Florida together.

They spent Tuesday night getting very cozy at E11EVEN nightclub … where RiRi rubbed his face in a way “friends” just don’t touch each other. Fact is they’ve been inseparable since Sunday night at the VMAs — but friends close to them tell us they’ve really been a thing (again) since January when they shot her “Work” music video. We’re told all the guest appearances at each other’s concerts this year haven’t been just for show — it was to spend as much time together as possible while touring. (TMZ)