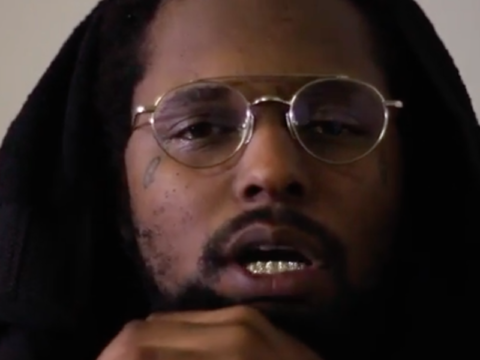 Based on early estimates, ScHoolboy’s latest solo offering should sell at least 50,000 copies.

Last week, ScHoolboy admitted he briefly retired from the rap game in 2015.

“I took a break from music to the point I quit. I didn’t even tell people I was retired or tell Top [Dawg] or Interscope. It was just a thing like, ‘I’m never going to give them an album so they’ll get the point.’ Then I just woke up one day and I just put the studio in the crib and was like, ‘I’d rather just do it that way.’ I was just in the growing up stage. I’ll be 30 in October. I know I look 45, it’s OK. I’ll be 30 in October. When you hit that age, it’s like you’ve seen things twice. … Life is changing and I’m really not a gangbanger anymore but I wanted to let people know that.” (Real 92.3)

Recently, Q talked about nearly quitting rap to care for his daughter.

“Yeah, to the point I almost quit,” Q said when asked if he felt like he missed key moments in his daughter’s life due to touring. “I almost quit for this [Blank Face] album, this period, after Oxymoron. Yeah. I was gone for a year and a half and before that I was gone for a year. The year before that I was gone for six months. You get what I’m saying? Because my daughter’s seven. Like the first two years I didn’t raise her because I was dirt broke. Then I only got two years in with her. My daughter always lived with me, I only got two years of raising her out of seven years. You get what I’m saying? I’m not about to be that rappers, that person, that puts his business, his money over his family. I go out and please everyone else making this money meanwhile my kid, my family is sitting around waiting for me to come back home.” (Hot 97)