Kota the Friend and Big Gigantic Snap On Deja Vu 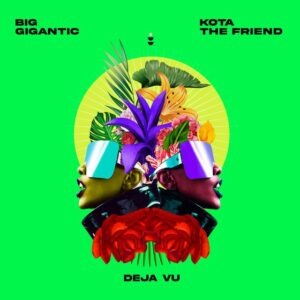 “We’ve been a fan of Kota the Friend for a while now,” says Big Gigantic’s Dominic Lalli. “So hyped that we got to link up him for ‘Deja Vu!’”

Lalli and Big Gigantic partner Jeremy Salken certainly set a grand stage for Kota.  Big melodies and hard trap drums create a driving, inspiring backdrop.  This is a new type of beat for Kota, who generally is most at home on more chill, jazz-centric instrumentals.  Rather than change his style, Kota adapts his flow, while staying true to top-notch lyricism.  In more short-bar form, Kota shreds the beat from the top, with tight, aggressive rhyme schemes: [“Hustling, climbing ladders/I’m focused and dodging chatter/We growin’ and breaking patterns.”]

Kota rips through his first verse, painting pictures of the drive it takes to get to the top, and how to dispel enemies who show hate rather than love.  His delivery is staccato, forceful, and energetic, melding cohesively with Big Gigantic’s vibrant beat.

“This is a collaboration that was straightforward and made sense,” says Kota the Friend. “Big Gigantic created this cool beat that was perfect for this song. We both stayed true to what we do and the result is a bangin’ track.”

Kota creates cohesion with a strong hook, further weaving his verses with Big Gigantic’s eerie melodies.  [“I put love into everything I do/Show love winning even when I lose/I’m the king of the hill so I feel my view/And I was down, but I’m feeling like it’s deja vu.”]

Big Gigantic and Kota the Friend just released the music video for Deja Vu at 10:00 am EST on Tuesday.  You can watch the video below:

Deja Vu follows Kota’s release of Lyrics to Go Vol. 3. Part of his acclaimed Lyrics to GO series, Vol. 3 features YouTube vignettes for each song and a short film, which was shot and edited by Kota the Friend.

Kota the Friend and fltbys will continue its Global Flight Night Hip-Hop Festival Series in Chicago, IL, on April 29th, 2022, at The Metro with Kota the Friend headlining.  Fltbys culture, and Flight Night itself are celebrations of independence, embracing a mission to shine the spotlight on underrepresented indie artists at each festival stop.

Kota the Friend and Big Gigantic have truly made history with a song that transcends genre, and celebrates independence.