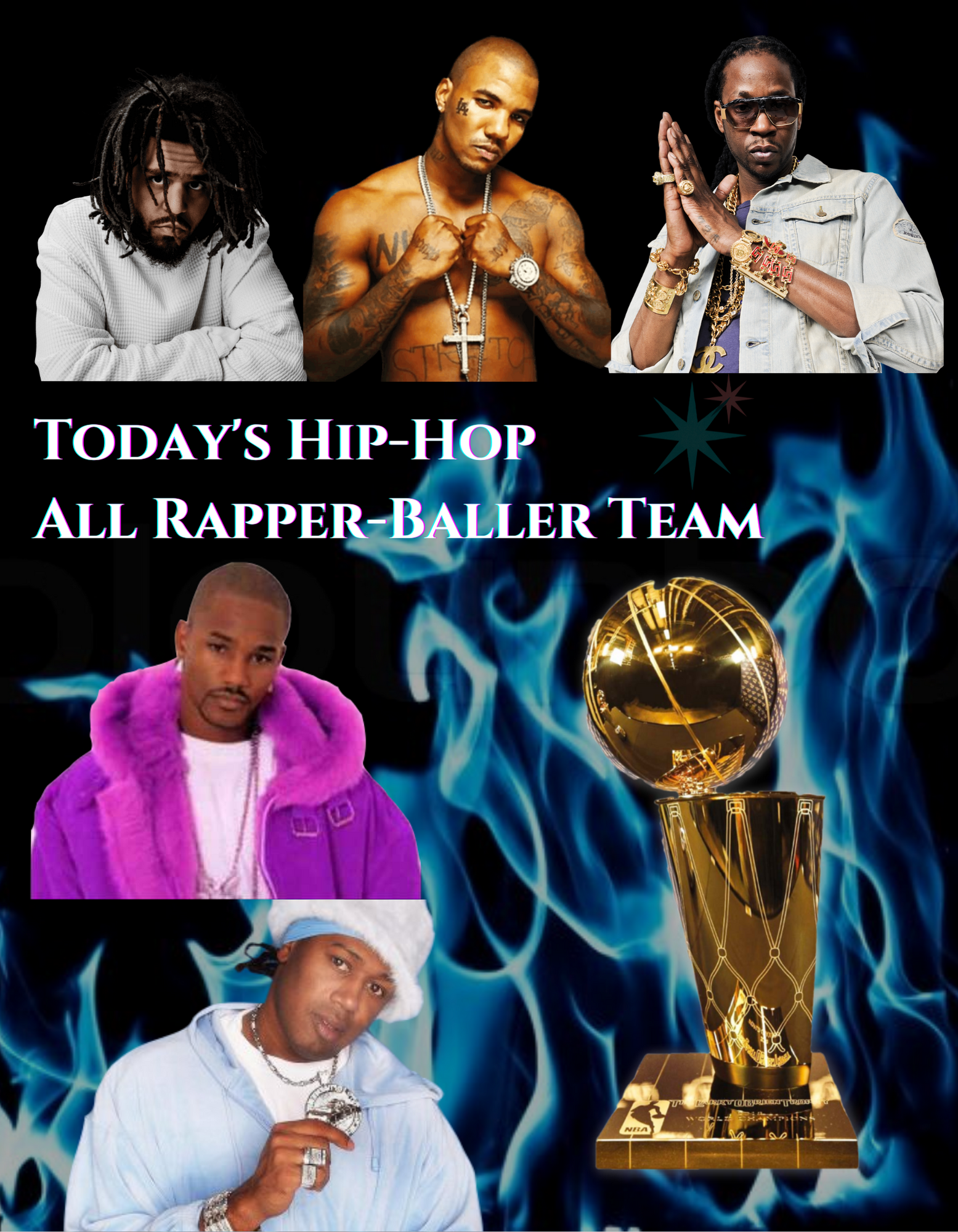 There is a long history of NBA players stepping up to the mic.  From Shaq to Ron Artest, and more recently Damian Lillard, Kevin Durant, and Iman Shumpert, many have tried their hand as emcees.  Not many, if any, have been very good.

Here at Today’s Hip Hop, our team decided to flip the script – if we were making a basketball roster out of rappers, what would our starting lineup look like?  A plethora of rappers had promising basketball careers as youth or high school players.  A few have ventured to the college ranks, and beyond.  We are honored and privileged to announce to you, the Today’s Hip Hop All Rapper-Baller team.

Growing up in Harlem is the first phrase in many great baller’s biographies.  Killa’ Cam was tested by the streets and had quite a prestigious basketball career as a youngster.  Touted for a silky jump shot, and a quick first step, Cam’ron was a top 25 recruit in the 1994 draft class, pairing with fellow rapper Mase in the backcourt at Manhattan Center in East Harlem.

Cam was recruited by Georgetown and Miami, but his poor academic performance in high school, coupled with a devastating hamstring injury derailed a promising career, but delivered us Dipset, and a beloved New York rapper.

With lyrics wrought with basketball reference, and credentials on the court, J.Cole is certainly a student of the game.  Cut from his high school team his freshmen year, Cole became the team manager, and worked hard to get a roster spot the next year.

J.Cole shocked many viewers in the 2012 Celebrity Allstar Game, throwing down an alley-oop from Kevin Hart.  In 2021, Cole signed a six-game contract with the Rwanda Patriots of the Basketball Africa League, amid the release of The Off-Season.  While his pro-basketball career was short lived, and relatively insignificant, Carolina’s finest certainly knows his way around the court.

Undoubtedly the go-to player on our team is Master P.  The Make ‘Em Say Uhh! rapper attended the University of Houston on a basketball scholarship but dropped out to pursue a Business Administration degree.

In his early 30s, Master P revitalized his career, enjoying tryout stints with both the Hornets and Raptors.  While he failed to make the season roster in either circumstance, his coaches commented that this was largely due to his size and athleticism, rather than his abilities on the court.

From another basketball hotbed, The Game played at Compton High School.  With impressive high school credentials on the court, he earned a scholarship to Washington State to ball.  An incident on campus derailed his career, but experience playing against future NBA stars such as Baron Davis and Gilbert Arenas speak to his potential.

The Game’s size, physicality, and silky touch make him a matchup nightmare – the numbers speak for himself, as he averaged 14 pts per game in high school.

Beginning his basketball career at North Clayton High School in College Park, GA, 2 Chainz was a certified baller, recruited by The University of Memphis and others, before settling on Alabama State.

At 6’5” 2 Chainz was a matchup nightmare, as his handles, skill, and shooting abilities were all advanced for a player of that size (at the time).  In two years as an Alabama State player, 2 Chainz averaged 4 points, and 3 rebounds a game.