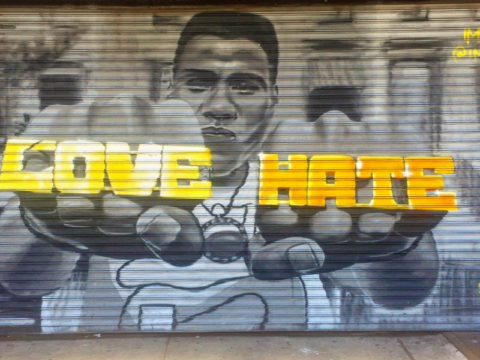 Hollywood actor Bill Nunn has died this weekend leaving a movie legacy dating back decades with films including Do The Right Thing and He Got Game.

According to reports, Nunn passed away Saturday (September 24) in Pennsylvania.

Actor Bill Nunn, a regular in friend Spike Lee’s films and best known as the towering, boombox-toting Radio Raheem in “Do The Right Thing,” died Saturday morning. He was 63. The 6-foot-3 Nunn — who also appeared in Lee’s “School Daze,” “Mo’ Better Blues” and “He Got Game” — passed away in his hometown of Pittsburgh, Lee announced via Facebook. Both were Morehouse College alums, with Nunn graduating in 1976. (NY Daily News)

RIP Bill Nunn aka Radio Rahiem. #LoveHate. Your image and message from "Do The Right Thing" is as relevant today as it was in '89. pic.twitter.com/TlFax38Sqy

Nunn previously discussed how he landed his now-iconic “Radio Raheem” role in Lee’s Do The Right Thing classic.

“Spike said, ‘Hey, I want you to do this,’” Nunn recalled to EW of the role in a 2013 interview. “He had me in mind to do Mister Señor Love Daddy at the time, the DJ character. But I’m so glad it worked out the way it did. Radio Raheem was really good for me because I like those characters that don’t have a lot of lines but they’re kind of significant to the story. I thought of Steve McQueen because I liked Steve McQueen’s silence a lot in movies.” (EW)