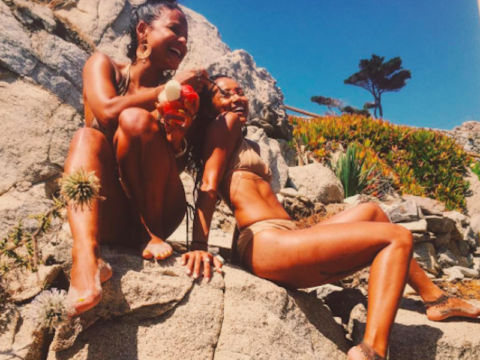 Turn Up Tuesday. It’s a day to turn all the way up SOHH why not get things going with Drake still being the hot topic on Joe Budden‘s mind? Speaking of things being on people’s minds, how about Kylie Jenner stuck with Tyga on the brain? With pretty women on your mind, is there a single flaw on Karrueche Tran‘s body? All this coming up in SOHH Whatcha Think.

There’s no question Joe Budden’s quick “Afraid” response to Drake’s “No Shopping” disses came at a great time and received plenty of attention. Notably using some lines to hint at Drake undergoing some body-altering changes. Joe has only added more fuel to that. Joe Budden’s Twitter is on it:

Lipo? Twice? Are we going to get some receipts? #SOHHWhatchaThink?

Is it safe to say Tyga and Kylie Jenner are back together? Did they ever really leave each other? Regardless of what really went down, they’re super uber together now and Kylie’s reminding us of that almost daily. Kylie Jenner’s Instagram has the latest reminder:

Will these two finally tie the knot? Do you see them being together forever? Is Tyga winning or is Kylie really winning? #SOHHWhatchaThink?

Do you think Chris Brown would drop everything right now if he could reunite with Karrueche? It’s crazy to think they’re really separated and have continued to go their separate ways. Karrueche’s been taking great care of her business affairs and especially her physical form. Karrueche Tran’s Instagram has the pics:

Any question Chris Brown is hurting right now? Is Karrueche flawless? Who should she date right now? #SOHHWhatchaThink?