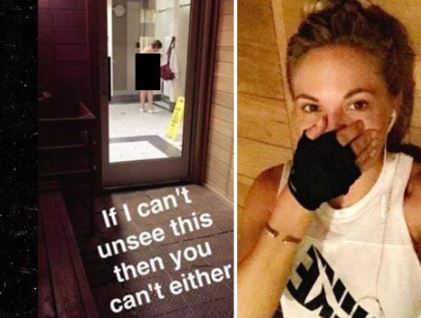 Here is an example of a vile human being: Dani Mathers. The ex-Playboy model is in hot water after she posted a photo to Snapchat that featured a naked woman in an LA Fitness locker room. The caption read: “If I can’t unsee this neither can you.” She could now face criminal charges.

Officials at LA Fitness went to police after seeing Mathers’s snap, saying she “egregiously violating a member’s right of privacy by taking a pic of her while naked in the shower.”┬áThe law used against Mathers regards prohibiting the dissemination of private images, which she could be in violation of for sharing the image with a humiliating caption.

The woman, who has not come forward (do you blame her?), has been listed as ‘Jane Doe’ in the criminal report.┬áMathers could face up to six months in prison if the woman comes forward, but could be off the hook if she doesn’t. ┬áThe 29-year-old was pictured for the first time looking glum on Friday, July 15 while leaving a Public Storage facility with her boyfriend, John Connor.

Mathers, who has came under fire for posting the photo, has reportedly also lost a radio show job and has been banned from all LA Fitness clubs.┬áOn Friday, she was suspended indefinitely from a longtime regular radio show gig on The Heidi and Frank Show on Los Angeles’s 95.5 KLOS.

Mathers has since offered up a pathetic attempt at an apology, which seemed to outrage people even more, as her insincerity and lack of empathy was palatable.

Ex-Playboy Model Dani Mathers Fired From Her Job and Banned From LA Fitness After Posting Body Shaming Photo of Naked Woman : The Source