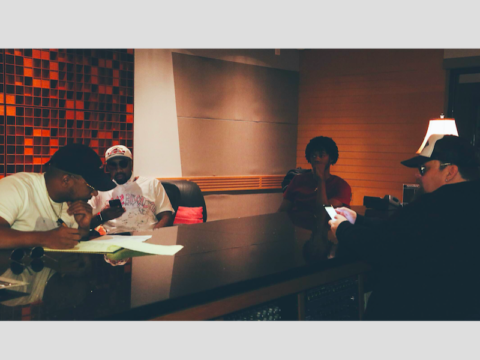 [With music duo Jonathan Hay and CyHi The Prynce continuing to churn out new records together on a regular basis, they now treat SOHH readers to their new “Long Damn Time” music video and provide some context behind the visual.]

The official video for the youthful single “Long Damn Time” was just released by Cyhi The Prynce and Jonathan Hay. Filmed by Hay’s go to creative director Sabrina Hale (who co-founded Jonathan Hay Publicity ), the video shows the creative process between Prynce and Hay while working out of Patchwerk Recording Studios in Atlanta, Georgia.

“Long Damn Time” stretches the hip-hop norm by spotlighting a 14-year-old singer from Texas named Ana, who already has a promising career ahead of her from her standout feature on Snoop Dogg’s Doggy Style Records release “Letters”.

Jonathan Hay and CyHi The Prynce Photo by Urban Hitchcock

In just a short amount of time, she has already been seen twice on Billboard, Houston Chronicle, Wave 3 News (Louisville, Kentucky), HotNewHipHop and support from all the major hip-hop blogs. Ana is a young star in the making and has received public support from both Snoop Dogg and Cyhi The Prynce. She is joined by fellow Houston natives, brother and sister, Lil JSean and Aesja, who also have promising careers in the entertainment industry. The siblings round off the song nicely with something that sounds like it was made with radio in mind.

Cyhi The Prynce is coming off major success from Kanye West’s The Life of Pablo in which he co-wrote 11 songs from the album, including “Famous”, the song that escalated the feud between Yeezy, Kim Kardashian and Taylor Swift. Record producer Jonathan Hay , who’s mostly known for being a celebrity publicist, currently has music he co-produced with Mike Smith all throughout “One Shot”, the hit television show on BET that’s hosted by Sway Calloway and stars DJ Khaled, RZA, DJ Drama, T.I., Tech N9ne and more.