Music #WrapSheet: Drake Is Back At #1 After A One-Week Hiatus 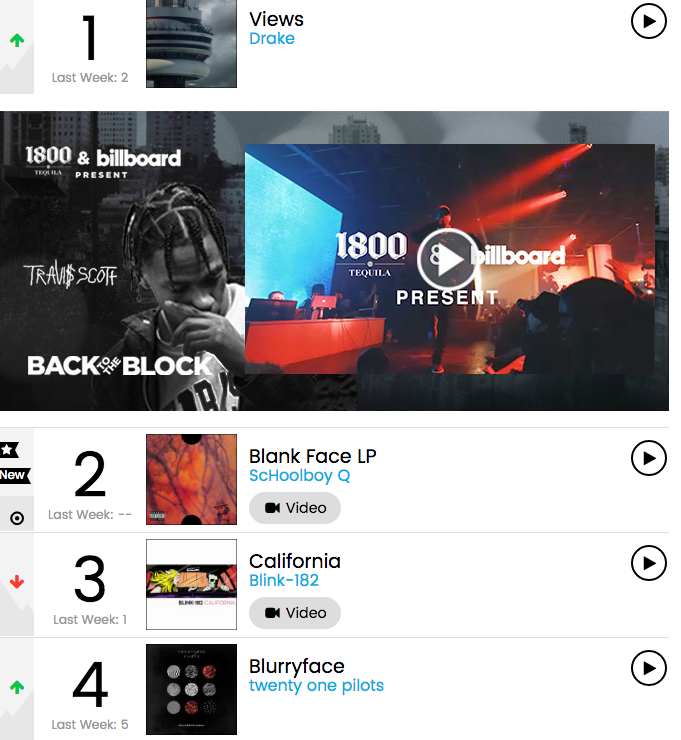 Drake has his eyes on the prize and he’s not blinking.

For nine consecutive weeks, Aubrey’s Views album–released on April 29–was the #1 album in the country. Not a single album not named Views, despite marquee releases from Meghan Trainor, Nick Jonas, YG and more, was at #1 for nine straight weeks, dating back to April 29 and ending last week, when Views was finally dethroned. By who, might you ask? Blink-182, the beloved group of rockers who hadn’t released an┬áalbum since 2011, stole a tenth consecutive week at #1 from Drake, but he’s gotten his revenge this time around.

For the tenth time, Views is the #1 album in the country, thanks to an impressive showing of 88,436 units moved, which was good enough to squeak past ScHoolboy Q, who pushed across about 78,000 units of his sophomore album, Blank Face LP. Right behind Drizzy and ScHoolboy were Blink-182, who stayed in the top 5 in their second week, followed by Twenty-One Pilots and the Hamilton Musical. With no major albums released last week or coming this week, Drake’s run might only continue more feverishly. Could there be an 11th and 12th week? There’s a pretty good chance.

As far as the Hot 100, the story is the same. Drake’s “One Dance” continues its incredible run, and currently sits at #1 for the 10th week, 9 of which were consecutive. It’s time we start looking at what this means in the grand scheme of things, and it’s quite incredible. This tenth week means Drake is tied for 6th all-time for most weeks at #1 with huge records like Kanye West‘s “Gold Digger” and Beyonce‘s “Irreplaceable.” What’s more, is that we still don’t have a music video for the song, which means its reign is likely only beginning. The record for most weeks at # is held by Mariah Carey and Boyz II Men, with “One Sweet Day” in 1995. You can bet that’s the number Drizzy has his eyes on. Here’s how the Top 5 rounds out.

Music #WrapSheet: Drake Is Back At #1 After A One-Week Hiatus : The Source