No Surprises Here, Nas And Hennessy Know How To Throw A Dope Party 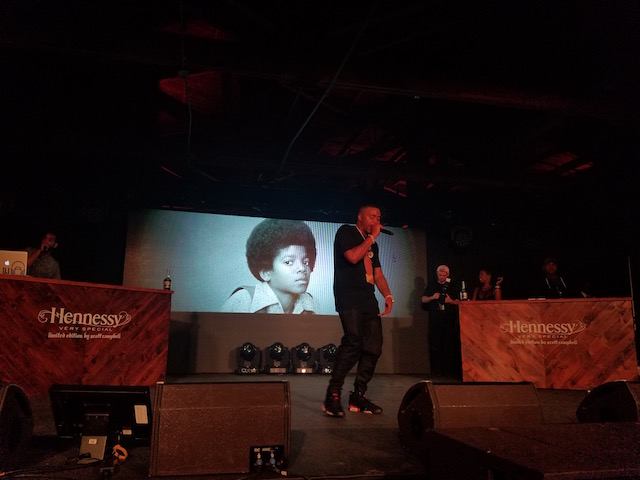 When Nas penned a deal with Hennessy back in 2013, it was a long time coming for the inevitable partnership, with Nas saying himself it was two decades in the making.

While some criticized Nas for previously being adamant about being anti-liquor endorsements at the early stages of his career, thereÔÇÖs something special about Henny the long-time enthusiast couldn’t pass up.┬áAs far as #RapperGoals are concerned, being a brand ambassador for Hennessy is up there with releasing a custom Jordan sneaker, going platinum without any features (‘sup J. Cole), a world tour, sitting down with President Obama, playing themselves in a feature film or eating steak off a modelÔÇÖs bare┬áback in Europe┬áa la 1980s┬áEddie Murphy. Cross any of those off the list, and rest assured, you’re doing just fine.

Last nightÔÇÖs event in Los Angeles (Thursday, July 14) was further proof NasÔÇÖ campaign with Hennessy, and promoting a lifestyle of ÔÇ£Never Stop, Never Settle,ÔÇØ is consistently working in his favor, while also inspiring others to live by the motivational mantra.

In the gorgeous setting of the Mama Gallery, located in an industrial part of downtown LA, the private event had walls lined with photos from CampbellÔÇÖs cognac partnership and history as an┬áartist, live tattoo models,┬áan interactive photo booth and of course, an open bar.

With the likes of Mario Lopez, Floyd Mayweather, Ashlee Simpson Ross, Evan Ross, Erica Mena, K Camp, Draya Michelle, Mario, Angela Yee, Karen Civil, Shaun Ross and more, happily in attendance to support the launch, the event had all of the ingredients to be a swanky night to remember, despite the copious amounts of alcohol in the room.

For the release party, the Mama Gallery was divided into three parts, each harboring a different vibe, providing guests with the option to get down to the soundtrack provided by DJ Spicoli, or conversationally gather while three models proudly sported projected designs curated┬áby Campbell to help build the artistic ambiance of the evening.

Dave East took the stage, much to the surprise of those in attendance, and delivered some of his staples, such as his “No Coachella For Me” and his “Panda” remix, while also showing off his NYC-bred rap talents to a friendly west coast crowd.

By the time Nas took the stage, the concert space was nearing capacity, bordered by bustling VIP sections, with everyone wondering if he would do just a couple songs and call it a night, or if he’d be generous with his time and talents.

Much to the delight of those in attendance, Nas powered through almost an hour long set and wasn’t remotely phased when he flubbed some of his own lyrics, laughing while admitting he hadn’t performed certain songs all the way through in almost 15 years. The whole performance was casual-yet-polished, in a way that shows at this point in his career, Nas is here to enjoy himself since he’s already spent over a decade proving himself as a legendary emcee. Powering through┬átracks such as “Represent,” “Hate Me Now,” “The World Is Yours,” “Street Dreams” and “One Mic,” the rapper gave an intimate performance with a tried-and-true confidence, humbling reminding fans he doesn’t have to deliver a perfect set to deliver a perfect set.

No Surprises Here, Nas And Hennessy Know How To Throw A Dope Party : The Source