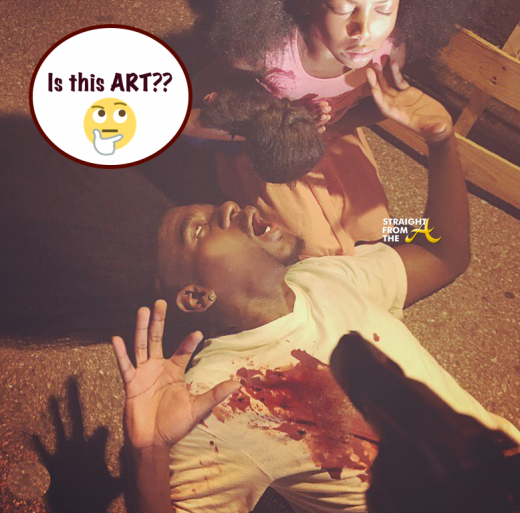 Sometimes art is meant to be just that… art, but often times it’s meant to make us think and to evoke emotion.

It’s only been 7 days since Castille was shot dead in the front seat of his vehicle during a routine traffic stop that was live streamed to millions via Facebook Live.

Songwriter/Model Benny Harlem recently pushed the envelope with several Instagram posts, where he recreated the disturbing image as he posed in a replica of Castille’s bloody shirt, while his young daughter posed behind him bearing a peace sign.

The posts have sparked several heated debates online and off. [Disclaimer: This is an open post. This post will not be censored or moderated. Disqus may automatically moderate certain words considered offensive. There are no rules in ÔÇÿOpen PostsÔÇÖ so enter at your own risk.] (more…)

OPEN POST: Is This Art? Benny Harlem Recreates #PhilandoCastille ShootingÔÇª (PHOTOS) : Straight from the A