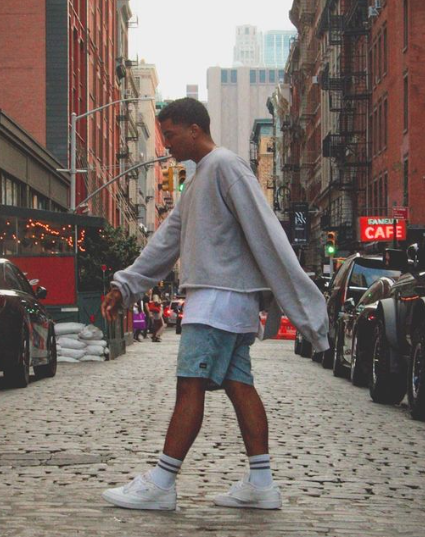 With Sandy’s up-tempo flow and melodic intonation as a backdrop, the FOH video beautifully supplements the track’s storytelling. FOH captures the intricacies of an intimate encounter at a house party. In a bleak sense though, ultimately insinuating that it’s not one that will last.  Like so many budding relationships that are born through drugs and substances, FOH paints a devastating picture of the loss suffered by those who lose friends, family or loved ones to drugs.

In the YouTube caption, Sandy shares: “*DEDICATED TO ALL THE KIDS WHO EITHER LOST THEIR LIVES TO DRUGS OR ARE CURRENTLY STRUGGLING WITH THEM. KEEP FIGHTING!”

FOH is one of many examples of Sandy Benjamin approaching serious topics with the steady hand of a poet.  His musicianship is so strong, that it often becomes easy to overlook the meaningful stories he shares with the world.  Low Income Browsing is home to several such tracks.

The album uses the close-knit relationship of Sandy and a close friend, Gigi.  Through their relationship, one can see an authentic, heartfelt view of their experiences growing up.  Never shying away from sharing the hard moments, yet incredibly endearing through the positive.

Introduced to poetry from a young age, Sandy’s art is often reflective of a damaged society.  Like a true poet, he does not preach, choosing to reflect the good, the bad and everything in between with authenticity.  Benjamin’s gifts as a songwriter and technical prowess has attracted the attention of formidable producers such as Sha Money XL, Timbaland, and Hi-Tek.