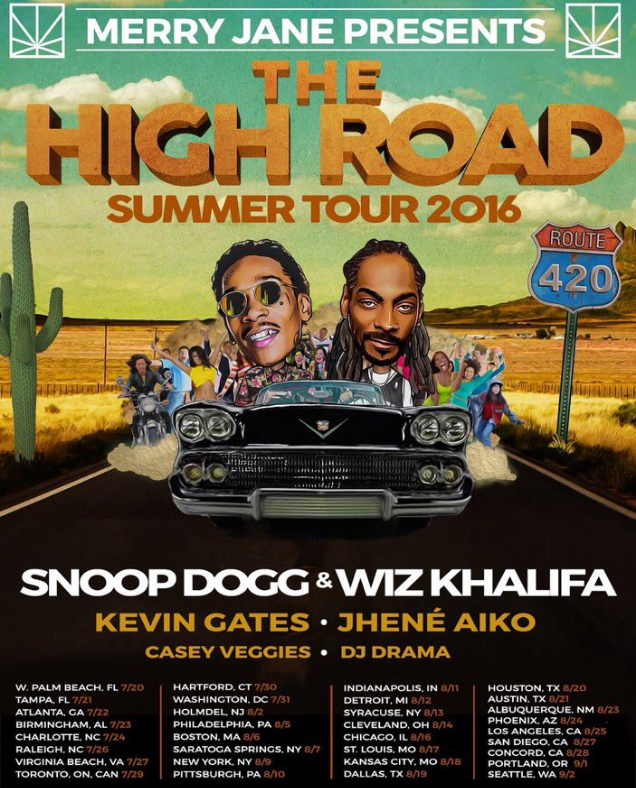 Inglewood, California’s own Casey Veggies warmed up the crowd with his unique west-coast vibes. His latest release Customized Greatly Vol. 4 provided the audience with the perfect music to enjoy the steamy Florida weather. Next up was Jhene Aiko who offered an earthy set complete with neon butterfly and mushroom cut-outs. The L.A. born singer sported a short and trendy grey-cut as she smoothly serenaded the crowd with standout singles from “Sail Out” and “Souled Out.” Backed by a band made up of a keyboardist, an electric guitar, and drums, Aiko got the crowd swaying by bringing acoustic and chill vibes to the serene arena.

As the sun set, temperatures on the stage rose┬áwith Kevin Gates as the next act on the line-up. Stepping out draped in Bape, Gates performed hits including “Really, Really,” “I Don’t Get Tired,” and “2 Phones.” Each song leveled up the crowd’s intensity, preparing them for the night’s headlining acts.

The night’s finale started strong with Snoop Dogg gracing the stage. The self-titled Dog Father, sported a Prince t-shirt, dark shades and in true OG Snoop D-O-double-G fashion, a blunt in hand. The crowd roared with excitement as he started his set with a few hits of what he called, “some sh*t no one has ever had before.”┬áSnoop emerged over a melody of marijuana related hits like “Mary Jane” by Rick James, and his own classic jam “The Next Episode.”

Shortly after Snoop’s arrival Wiz Khalifa joined him on stage as the generations met for the first time in Florida. The visual ignited so much energy into the crowd, the arena was brought to it’s feet. The duo performed classics from both of their repertoire satisfying their individual fans, and they fans they have formed together. From “What’s My Name,” to “Drop It Like It’s Hot,” Snoop Dogg made sure to cover all of the hits that put the west coast on the map for it’s prized plant. Meanwhile, Wiz Khalifa pulled from his extensive discography dating back to his breakout mixtape “Kush & OJ” and back up to his recent single “See You Again,” from the Furious 7 soundtrack.

The night would not have been complete without a a full blown set where the two performed together. In the midst of them turning up to their individual classics together, blunts from the rapper’s own hands were thrown into the crowd for lucky concert-goers to ogle over. However, not to leave anyone out, life-size inflatable joints were thrown into the crowd┬áwhich was kept afloat with the energy and excitement of the night. Before saying goodbye, the duo made sure to let all fans get a chance to turn up with them as they┬áfollowed a secure pathway to the middle of the audience, throwing water and turning up together, unapologetically.

By the end of the show both Snoop and Wiz where shirtless, as much of the male crowd, but still covered in excitement that the smokey night of good music and good vibes┬ábrought.

Merry Jane Presents: The High Road Tour is set to hit Atlanta tonight [July 22, 2016] at the Lakewood Amphitheater before continuing on to other cities in the south. The 34 date tour doesn’t end until September 1st giving fans┬áall over the country a chance to catch the spark that Snoop and Wiz share up close and personal.