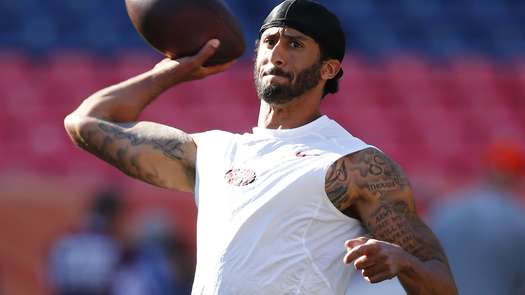 Stephen Curry is the latest athlete to back 49ers QB Colin Kaepernick by stating he supports his decision to sit during the national anthem.

In an interview, Curry explained that he is glad Kaepernick decided to exercise his freedom of speech by remaining hopeful that African-Americans will be treated fairly and receive equal rights someday. This will most certainly continue to drive the conversation in hopes for a real change in America. Take a look at what Curry had to say below.

Per the San Francisco Chronicle:

“I love that there’s freedom of speech and he can stand up for what he believes in,” Curry said in an interview with CNBC’s Sara Eisen. “There’s going to be people that disagree with him and there’s going to be people that agree with him, which is what I think our country stands for, which hopefully will drive the conversation to bettering the equal rights and treatment of African Americans and people of color.

Curry is the latest athlete to speak on the Colin Kaepernick decision to protest the national anthem. Hopefully, this will stir up more conversation for the masses as we land our focus on the real problem of police brutality on minorities. We are looking forward to watching Chef Curry and KD playing on opposite wings at Golden State.