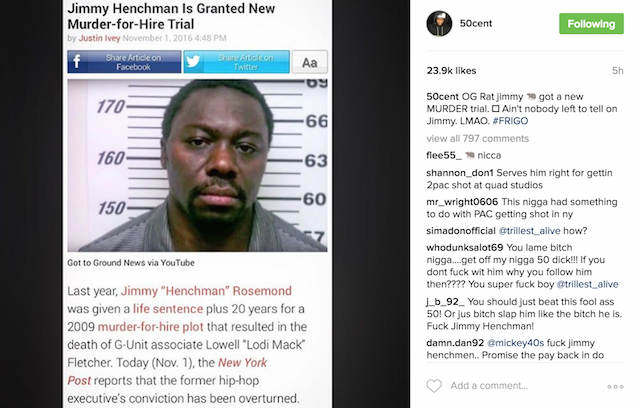 50 Cent may not forgive but he certainly doesn’t forget either. After learning that Jimmy Henchman’s murder-for-hire conviction was overturned, Ferrari took to social media to throw a quick dart at the former CEO and founder of Czar Entertainment. Posting a screenshot of the news story, 50 added his two cents to the new development.

If you’ve kept up with 50 Cent’s career this shouldn’t come as a surprise as the man has made a living out of clowning his foes in music, videos, and on social media.

For anyone who isn’t familiar with the situation, 50 Cent and James Rosemond a.k.a. Jimmy Henchman have been at odds for more than a decade, but things got out of hand when some of 50’s G-Unit soldiers allegedly put hands on Rosemond’s 14-year-old son in 2007.

In 2009, Jimmy allegedly ordered a hit on G-Unit affiliate Lowell “Lodi Mack” Fletcher as retaliation for the two-year-old incident.

Jimmy Henchman was convicted of murder-for-hire but a U.S. Circuit Court ruled that the judge in the Fletcher trial made errors that affected the fairness of the trial.

Though this may seem like a win for the former entertainment manager, he is still currently serving a life term for his involvement in a $11 million dollar drug ring. Those are the breaks.

You can see the now deleted post of salt below and let us know if you think Fif went too far or if it doesn’t even matter at this point.