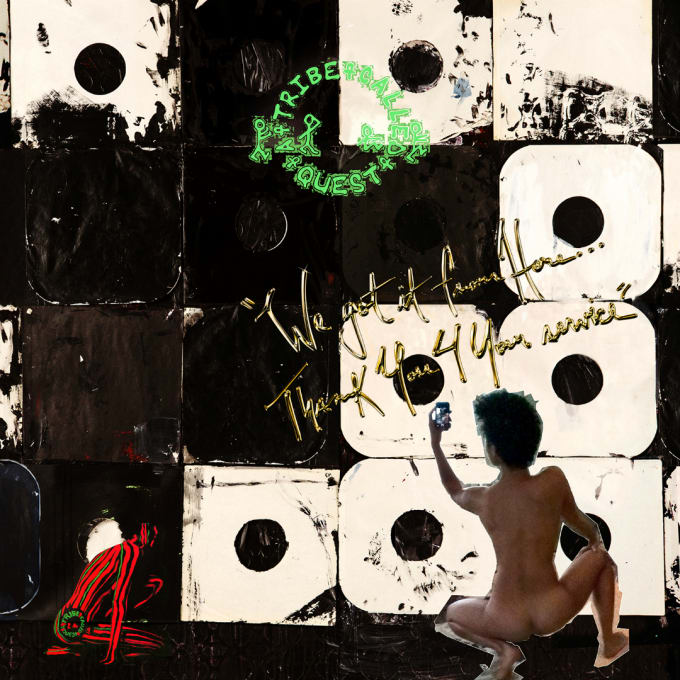 That moment when you scratch your head at the last A Tribe Called Quest album cover, ever.

A Tribe Called Quest has always delivered cover art that made you take a second look and study. Their latest offering follows in that tradition.

This morning Complex unveiled the cover art for We Got It From Here…Thank You 4 Your Service, which will be the last and final album from the group.

The cover art was conceptualized by photographer and painter Richard Prince. You may remember him as the guy who has made a living copying off of other people’s work and selling stranger’s Instagram selfies for $100,000.

Which makes the placement of a naked woman appearing to take a selfie appropriate here. She is featured alongside ATCQ’s trademark red, black and green lady, perhaps representing the transition the culture as a whole has made from when Tribe first came out. Could the cover be the group’s way of explaining the album title as the culture saying to them, “Thank you Tribe for your contributions, but sh*t has changed, we’ll take it from here?”

Unoriginality. Appreciation of one’s natural beauty morphed into digital narcissism disguised as self-appreciation. Wow, so many layers here when you look beyond the surface.

Plus, Q-Tip always wanted to have an actual naked woman on an album cover. Looks like he finally got his wish.

ATCQ also revealed some new merch to go along with the Nov. 11 release. Check it out after the jump. Pre-order the album here.

The post A Tribe Called Quest Reveals We Got It From Here…Thank You 4 Your Service Cover Art And Merch appeared first on Hip-Hop Wired.

A Tribe Called Quest Reveals We Got It From Here…Thank You 4 Your Service Cover Art And Merch : Hip Hop Wired