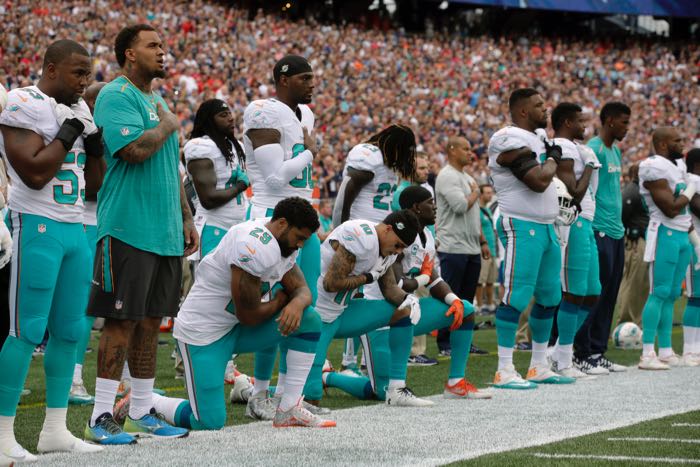 Colin Kaepernick’s silent protest of the national anthem got the police in Florida acting extra petty… again. When Miami Dolphins players Kenny Stills, Arian Foster, Michael Thomas, and Jelani Jenkins joined in on Kaep’s protest of the national anthem on opening day the Broward Sheriff’s Office union took notice and didn’t like it one bit. With the Dolphin’s home opener coming up police union officials from Broward are asking officers who work security for the team to fall back on their detail until every player on the home team stands for the Star-Spangled Banner.

“We’ve asked the deputies and the Broward Sheriff’s Office not to do the details anymore,” said Jeffery Bell, the president of the International Union of Police Associations, Local 6020.

In what some might consider a contradictory statement, Bell argued that the right to freedom of speech is not a universal one.

“I respect their right to have freedom of speech. However, in certain organizations and certain jobs you give up that right of your freedom of speech temporary while you serve that job or while you play in an NFL game,” Bell said.

First they wanted to pull security on Beyonce’s concert for her “Formation” tour and now this.

To protect and serve might be the motto but police officials in Florida seem more concerned with their feelings and public image than they are with public safety.

The post Cops Ready To Pull Security On Dolphins Players Because Of National Anthem Protests appeared first on Hip-Hop Wired.