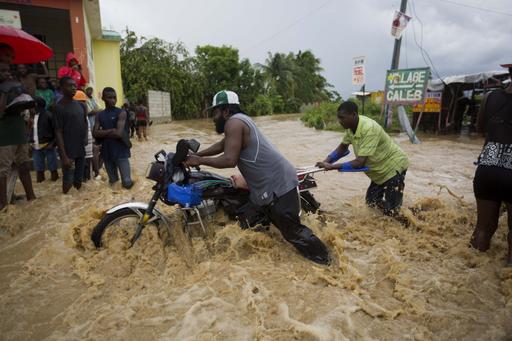 Hurricane Matthew has left almost 900 people dead on the island nation of Haiti, and the death toll continues to rise. According to one news report, up to 90% of parts of the island have been destroyed.

The casualty toll was far greater in Haiti, where at least 877 people died earlier, a tally that ticked up as information trickled in from remote areas of the impoverished Caribbean island nation.

Matthew howled through Haiti’s western peninsula on Tuesday with 145 mph (233 kph) winds and torrential rain. Some 61,500 people were in shelters, officials said, after the storm lashed coastal villages in high surf.

The U.S. military began sending aid to Haiti by air and sea. The U.S. Navy amphibious transport dock ship Mesa Verde was due to arrive on Sunday with heavy-lift helicopters, bulldozers, fresh-water delivery vehicles and two mobile surgical units. Iwo Jima, a second U.S. Navy ship, was due to arrive on Oct. 13.

Aid group Doctors Without Borders was flying personnel to Haiti by helicopter. The Haitian government warned a deadly outbreak of cholera could worsen, confirming dozens of new cases of the water-borne disease since the storm hit, 13 of them fatal.

According to the BBC, certain towns in Haiti’s southern region were 90% destroyed.

Thanks to the f*ckery of Donald Trump, the devastation in Haiti is not getting as much media coverage as it should. We can’t help but feel that the fact that these are Black people suffering is also a factor.

If you want to help, numerous options presented right here. Pray for Haiti.

Men push a motorbike through a street flooded by a river that overflowed from heavy rains caused by Hurricane Matthew in Leogane, Haiti, Wednesday, Oct. 5, 2016. Rescue workers in Haiti struggled to reach cutoff towns and learn the full extent of the death and destruction caused by Hurricane Matthew as the storm began battering the Bahamas on Wednesday and triggered large-scale evacuations along the U.S. East Coast. (AP Photo/Dieu Nalio Chery)